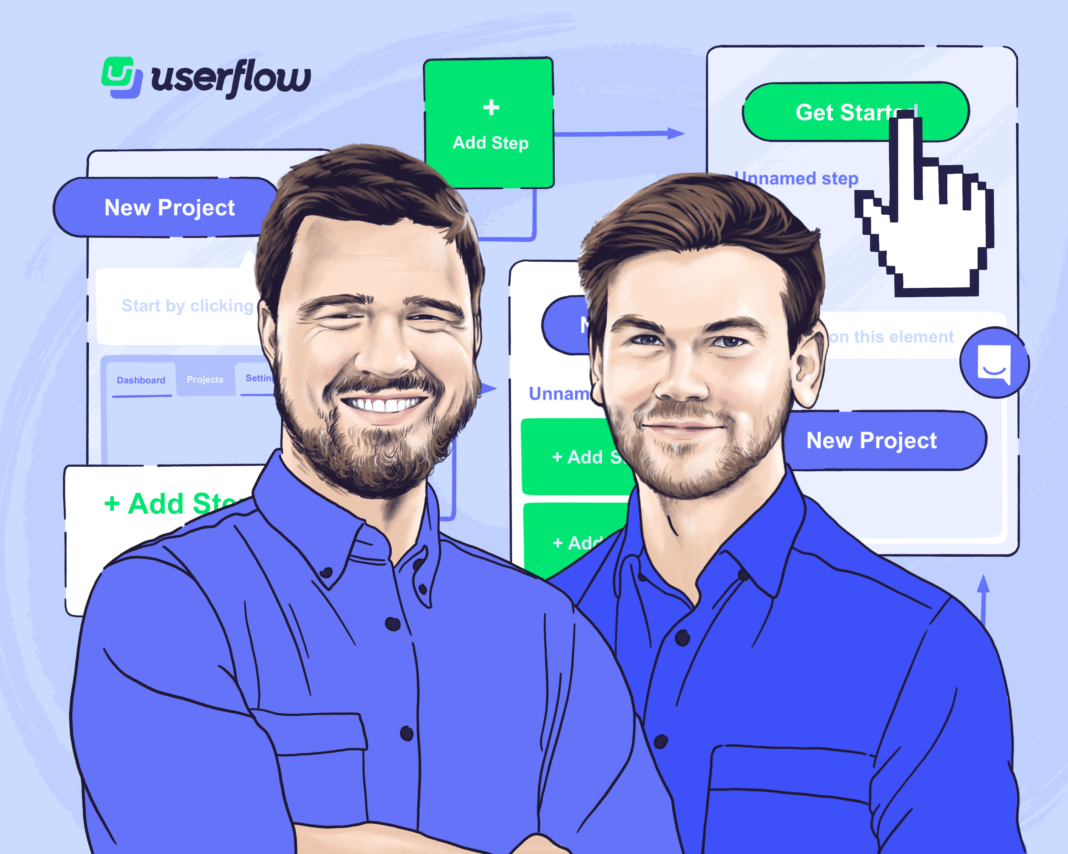 Most entrepreneurs shy away from a crowded market. You’ve probably heard the misconception that you have to offer something new to build a successful startup. But Userflow doesn’t follow that business model. Founders Sebastian Seilund and Esben Friis-Jensen entered a saturated space and still came out on top. How? With friendly UX and codeless configuration.

Userflow’s origin story involves an antsy developer working for Google. But Google was no match for Sebastian’s entrepreneurial bug and he left to build Studio1 in 2018. He aimed to automate the production of screencast videos for customer support, marketing, and sales. Unfortunately, Studio1 fizzled out after launch. The product failed to impress its early users, leading to a lackluster performance on ProductHunt.

Sebastian wondered if he should scrap the whole venture. Since he was so invested in Studio1, he needed a fresh pair of eyes (or several) to help him decide. He probed his colleagues for their honest post-mortem. Criticism isn’t always an easy pill to stomach, but Sebastian wanted to learn from his mistakes.

The feedback? His customers loved the product tour – a feature Sebastian had built as an afterthought. Back when Studio1 was ready for the public, Sebastian created a product tour for new customers to help them understand how it worked. Little did he realize it would be the genesis of a new business.

Sebastian returned to first principles: How would he take this kernel of an idea and turn it into a new business? Rather than just a video demo, he’d include in-app tours, checklists, and surveys of new users. But first, Sebastian wanted to know if anything like this existed before investing all of his time and resources into it. He wasn’t going to make that mistake twice.

Get to Know Your Competition

Unfortunately for Sebastian, he found the market saturated with software doing just what he’d hoped to develop. “There were a lot of players out there and they were all well-funded and big.” Rather than abandon his idea, however, he analyzed his competitors’ weaknesses. Maybe Userflow would succeed if Sebastian built something better.

“The UX was poor, they were not product-led, and they certainly weren’t product-focused,” Sebastian says. Usually, a product tour would involve hiring a costly developer to build it, and then a business would integrate it into their software. Sebastian thought this was inefficient. He wanted to help businesses create tours themselves.

After building the Userflow MVP in Javascript, Sebastian presented it to his Studio1 focus group. The response was overwhelmingly positive, so he splashed out on Google ads to bring the product to market. It had the hallmarks of a slam dunk, but in such a crowded market, Sebastian would need a smarter strategy than paid advertising.

How Do You Make Your Product Stand Out

Most bootstrapped entrepreneurs that pay for advertising want to be front and center. Sebastian’s competition had deep pockets and he realized quickly that he could never outspend them. But he could outperform them. As his prospects rushed to the competition, Sebastian bided his time, silently improving his product and giving away free trials.

Customers converted their free trials into paid subscriptions and reiterated what Sebastian knew all along: Their product was easier to use than others in the market. Sebastian’s product didn’t need an engineer. Anyone could get started with just a Chrome extension. “It’s not about being well-funded or having a big sales team or customer success team. It’s about having the best product and allowing people to try it, see the value, and buy it.”

At this point in the story, Sebastian was working solo. He found it hard to both sell and develop the product on his own. He reached out to a friend and fellow entrepreneur, Esben Friis-Jensen, to join him as a co-founder to take it to the next level.

One of the first things Esben did was raise prices. He explained that it’s common for founders to undervalue themselves. Maybe Sebastian was being modest but to propel growth, he needed to charge more. When they had sold enough subscriptions to invest in SEO, Userflow began to rise to the top of search results, where the competition had dominated for so long.

The duo was able to grow far quicker as a team. They didn’t divide the work between product and growth but instead shared the load equally. Esben says, “Initially, I could come in and 100 percent focus on growth and he could 100 percent focus on the product. But the power is that both Sebastian and I care about both aspects. It’s not binary, it’s a collaboration.”

True to its name, Userflow has changed to meet its users’ needs. The more questions Esben and Sebastian answered, the clearer it became that their customers wanted more control.

“If it’s not self-service, why not? Let’s not only make it self-service but also improve the UX across the board.” This constant focus on UX has been a part of Userflow’s makeup since day one. Esben explains, “You have to have a good level of UX improvement focus and feature focus. You cannot just focus on features because then you’ll get more UX problems. It needs to be a balance.”

Why They Won’t Outsource Customer Support

The customer support requests still come in, although they are less frequent. Sebastian and Esben both make a point of handling support. “When you build these large organizations, people get further and further away from the customers. This can lead to a customer service team that is close to the customers but the product and development team becomes far away from the customers even though they are building for them. This can lead to analysis paralysis among many teams that are involved. We like to speak directly to our customers.”

Esben’s advice for fellow bootstrapped entrepreneurs: “B2B is great for startups because you earn money faster. B2C is a bit of a journey and it takes longer. If you know about a B2B problem and you have a solution, go do it. Don’t be discouraged by somebody else having built a solution in the space. We started a company in a very crowded space but we did it with the user in mind. We aren’t even close to being finished with building software businesses that solve problems. Go get it.” Truer words were never spoken.