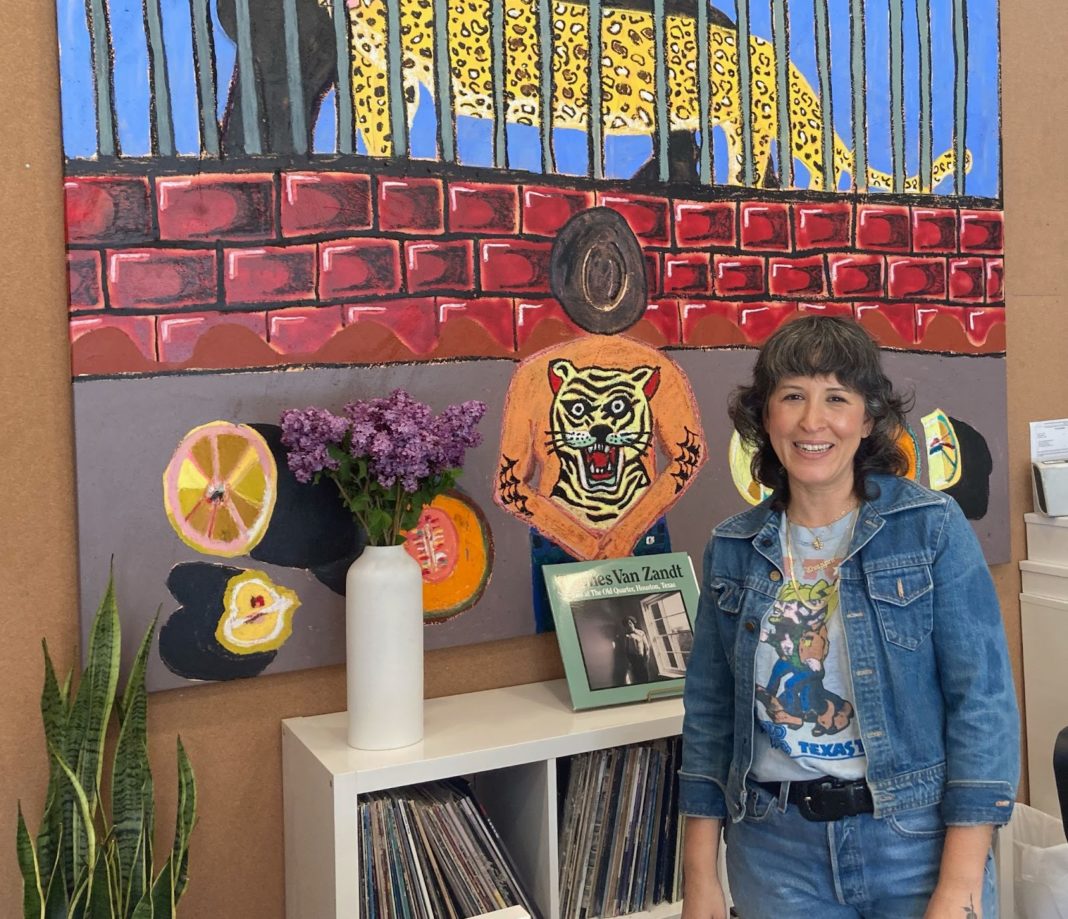 Many founders don’t find success right away, and some of their ideas never get off paper (many go in the trash). But when a first business reaches astronomical heights only to crash in the form of six-figure debt and a lawsuit, most entrepreneurs would throw in the towel. Mitra Khayyam is not most people. She turned her love of country music into a lifestyle brand, Midnight Rider, steeped in Americana, and her past mistakes propel her forward with renewed vigor and energy.

When Mitra was twenty-four years old, she was a student at Parsons School of Design graduating with a degree in business marketing and management. She had always been interested in the intersection of art and business. Mitra says, “I was always that kid who wanted to own a store.”

Her business acumen continued to grow from her lemonade stand days. Mitra’s thesis at Parsons was all about democratizing art by using t-shirts. She explains, “It’s a way for people to learn about emerging artists outside of galleries, academia, and institutions. How can I help people learn more about art? How can I help artists get new clientele? T-shirts are the most democratic medium out there.”

When Mitra’s friend, an artist, was approached by Urban Outfitters to collaborate on t-shirts, Mitra jumped into action. Urban Outfitters was offering roughly 75 cents a product and Mitra convinced her friend to let her manage the deal. “I already had this thesis and I thought – let’s take this idea. I’m in Los Angeles and we have factories and production.” When Mitra was at Parsons, she had worked for a t-shirt company so had loads of connections at the ready.

And so Blood is the New Black was born. Mitra worked with up-and-coming artists so they shared ownership of the products. Mitra explains, “I would put their name on the back of the shirt. Their name would be in the hangtag. Links to the website, features on the site, absolutely nothing was branded because it was all about the artist.” That one Urban Outfitters deal led to others at international retailers: Mitra sold at Nordstrom, Zumiez, high-end boutiques in Japan, and the famed Collette in Paris.

There was a problem, though. Outwardly, Blood is the New Black was expanding and landing enormous deals. But internally, there was “a lot of volume for not a lot of margin.” Everything was made in Los Angeles, so operation costs were high.

Mitra looks back on that time with candor. “I wanted to be a serial entrepreneur but I didn’t realize that I needed to keep myself streamlined and focused. That’s probably a result of age and inexperience. I’m someone who learns from trial and error. It’s so important to let yourself make mistakes because that’s how you learn and to be gentle with yourself when you make mistakes because you will.”

Blood is the New Black did not last. Mitra says, “I will acknowledge that I ran Blood is the New Black into the ground.” There was a point when Mitra was six figures in debt because she had “too many balls” that she was trying to juggle. She had “one too many employees.” She wasn’t manufacturing with enough margin. All of this coincided with a major cancellation and Mitra’s father’s passing. Mitra explains, “I didn’t stop to take care of myself. I got hit with a major lawsuit, but fortunately, I had business insurance.”

It was a perfect storm, but somehow, Mitra kept pushing forward. She was trying to sell Blood is the New Black in a firesale. While she was navigating that process and the lawsuit, she received a direct message on Twitter that restored her faith in the universe.

Mitra is a Persian-American gal from the San Fernando Valley (a “Valley Girl” through and through) so her love for country music wasn’t an obvious choice to most. But ever since she was young, Mitra has loved all things country. When Mitra received a direct message from country music star Waylon Jenning’s son, Shooter, it was a magical moment indeed.

At the time, there weren’t high-quality t-shirt brands focusing on the country music industry. Mitra describes the market as follows: “Everything you see in the country music world was hokey and rhinestoned and blinged out.” The Jenning family wanted a completely different aesthetic for merchandise to honor their late father. Could Mitra come up with something?

Mitra knew that she could. But more than that, she knew that the demise of her first business would not define her. This was surely a sign. The country music industry was “steeped in American history” and Mitra knew how important it was for the merch to stay home-grown. “It didn’t make sense to have it made overseas to save a few dollars.”

Midnight Rider, named for the famed Allman Brothers Band’s song, was born. Mitra never doubted her ability to move forward. “You wake up every day, not knowing what can go wrong and realizing that you’re the responsible party behind all of it. This job is really about solving problems. It’s creative and it’s fun. There’s a lot of cooperation but the day-to-day job is solving problems. It takes a certain personality type to wake up and say ‘I’m ready for this.’”

Mitra got busy designing and returned to the stores that used to sell clothes for her former business. She never worried about how she would be perceived. She says, “There was never a point when I had any other option because, at the end of the day, I’m not going to ask my family for help. That’s not me. I needed to make it work. I didn’t have other options. I’m pretty rough and tumble.”

Shooter Jenning’s friendship opened up a world of opportunities for Mitra. Any musicians that she approached only had to hear that she was working with Shooter and deals closed quickly. Plus, Mitra was providing musicians long relegated to smaller markets with merchandise distribution deals in big cities like Los Angeles, San Francisco, and New York.

Country music may get a bad rap in some parts of the United States, but it’s completely misguided, according to Mitra. “I’ve heard people say that there’s a level of sexism and under-education, and none of that is true. It’s incredibly frustrating that people have made these assumptions because country music is about getting at the tender side of the human experience”

Midnight Rider opened its first physical store in Eagle Rock, California. Mitra has hired one full-time employee but is keeping her expenses much leaner this time around. She is involved in many initiatives to bolster a sense of community in Eagle Rock including “Shop Small Weekend” to encourage neighborhood shopping. She replicates this sense of community online with an active social media presence, particularly on Instagram.

Midnight Rider is currently averaging approximately $100,000 in sales per month. This number continues to grow as Mitra launches new partnerships. Her latest, with the famed musician, Willie Nelson, cements Midnight Rider in the pantheon of Americana forever.

Mitra credits meditation with keeping her calm despite all of the highs and lows of running a business. She says, “I have not come across anything that I haven’t been able to just meditate on for a few days and then figure out what the next steps are.” Mitra walks the line by being authentic, hard-working, and tenacious. Johnny Cash would be proud.