How These Bootstrapped Entrepreneurs Landed a Six-Figure Deal on Shark Tank with Media Darling, Mr. Wonderful 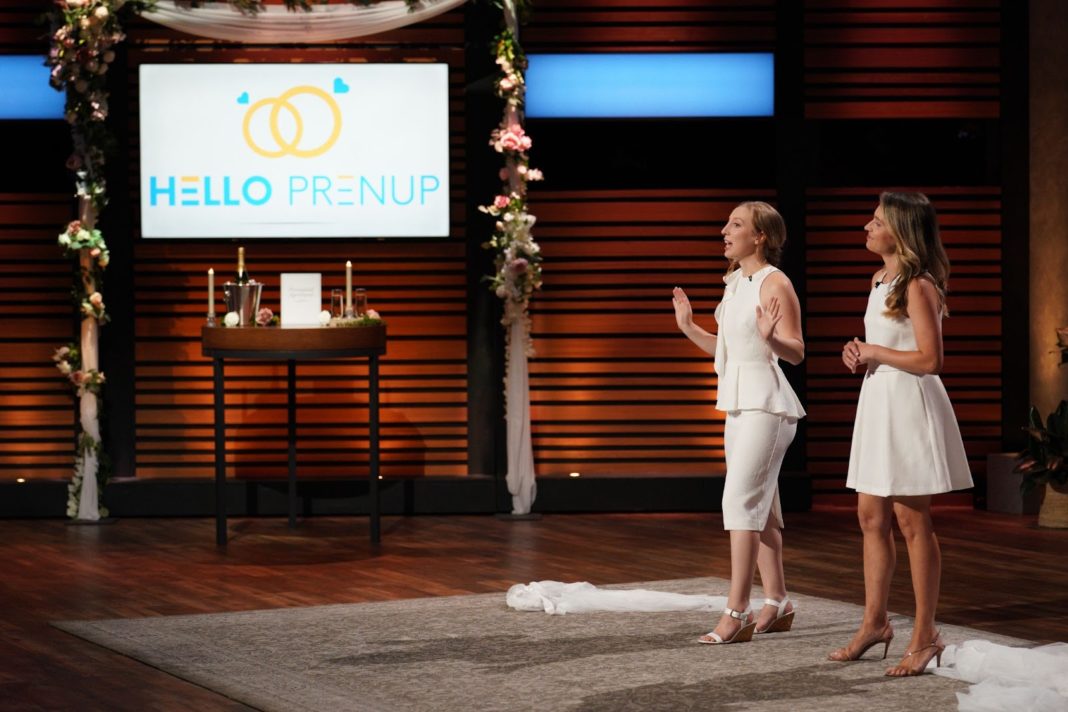 Getting engaged is magical and filled with so much joy. Many people have been planning their weddings in their heads since they were children. They seek unique proposals, venues, and vows. You know what’s not glamorous? Prenups. Let’s face it, while necessary and important, drafting prenuptial agreements is clinical and nerve-wracking. But Sarabeth Jaffe, and Julia Rodgers, the founders of Hello Prenup, are changing this narrative by making prenup talk and execution intuitive, painless, and as easy to navigate as deciding on calligraphy fonts for invitations.

Hello Prenup is the first online platform that allows engaged couples to create a prenuptial agreement without an attorney. According to Sarabeth, “It’s a lot more affordable, it’s faster, and it’s less intimidating than going to a divorce attorney when you’re engaged.” The idea of drafting a premarital document at a divorce attorney’s office seems counterintuitive – divorce attorneys drafting prenups is a bit like holding diet support groups in ice cream parlors – but it’s the status quo.

Hello Prenup was initially founded by Julia Rodgers because she saw a niche that she knew she could fill. As a divorce lawyer, she was fully aware that high retainer fees would make prenups out of reach for most millennials. And yet, millennials were the ones who were most adamant about normalizing a document that was taboo in previous generations. They watched their parents get divorced at a rate of close to 50 percent and then fight in court about items that could have easily been preventable. Julia believes that a prenup makes for a healthier marriage because everything is out in the open from the beginning.

Julia hired a seasoned divorce attorney and a legal ethics advisor to guide her when she first incorporated in late 2019. She says, “Advisors are great because you don’t have to give away a lot of equity, but their advice and guidance is incredibly valuable. Although I am an attorney myself, I knew legal ethics was a very complicated area. We needed experts to avoid any pitfalls. I brought on a divorce attorney advisor because I believe that experience and diversifying opinions will always build a stronger product.”

Julia is a big believer in collaboration. She says, “Teamwork is everything. To successfully innovate in a given area, whether it’s technology, law, finance, etcetera, fill your team with complementary experts in that space. Regardless of whether you happen to be an expert in your given field, it is important to recognize where there are knowledge gaps and fill them by building a strong team.”

Julia started Hello Prenup with $130,000 of her savings. She outsourced the entire website to developers overseas, relying on them to create the beta version of the software. She did this to save costs, but unfortunately, the product was glitchy and hard to navigate. It was also difficult for Julia to draw in customers online to an inconsistent program.

In March 2021, Sarabeth Jaffe was taking time off from work to evaluate her next career steps. She had done stints for various startups and had worked at Microsoft. When she got engaged, she began researching cost-effective prenups. She found very little online, and that’s when she realized that her computer background would allow her to build this service. But to do so, she wanted to team up with an attorney who could help her navigate the legalese.

During her initial research, Sarabeth came across an interesting website (spoiler alert: it was Hello Prenup). “I had to dig to find the website. Hello Prenup had a lot of content, but it wasn’t indexing very highly on Google. I tried to sign up for the software and it was down for maintenance.” At this point, it was clear to Sarabeth that she wanted to team up with the person behind the site.

A Cold Email and a New Partnership

Sarabeth emailed the contact email on the website, and Julia responded soon after. They set up a zoom call for the following day and excitedly talked through their ideas. They aligned on nearly everything and quickly established a partnership.

Up until this point, Julia was doing everything herself while working as a full-time attorney and raising a young child. Julia says, “My daughter was born during the beginning of the pandemic, so there was no option for child care or family help. It was a struggle, but it taught me the importance of reliable childcare. I think the pandemic brought to light many of the systemic inadequacies of child care and the expectations placed on working mothers.”

Julia breathed a little easier with a new partner on board. Sarabeth rebuilt the software and streamlined all of the existing blog content that Julia had spent months populating.

While Sarabeth rebuilt the site, Julia applied to appear on the television show, Shark Tank. This would bring their business more visibility and the prospect of outside funding. But the application became another full-time job and a roughly eight-month commitment from start to finish. Sarabeth explains, “The Shark Tank vetting process is multi-stepped and requires interviews with producers, details about your business’ financials and its founders, and of course, pitch submissions. We knew that at any point we could be dropped from the running, so we gave it our all in every single round.”

“Hello Prenup is the first ‘legal tech’ platform to ever be showcased on Shark Tank, so we knew that we stood out in that way. Any opportunity to make our business shine, we took. That included being high energy in our pitch and producing theatrical ways (like wearing veils and wedding garb in our pitch) to make a sometimes boring topic like prenups lighthearted for the American audience.”

All of the Shark Tank prep coincided with a full rehaul of Hello Prenup’s website. Sarabeth explains, “It was challenging simultaneously building our business while meeting every Shark Tank deadline, but we knew if we made it, it would change the trajectory of our company.”

All of the hard work that the partners poured into the new iteration of their business began to pay off. Clients found Hello Prenup through organic search, but it wasn’t until the partners received a life-changing call that business exploded. Sarabeth explains, “We were confirmed for a filming date with about five weeks’ notice, so we started working immediately. Still, we made some last-minute changes to our pitch the night before.”

The Ability to Remain Calm Under Pressure

The partners brought their infectious enthusiasm to the Shark Tank stage. They came out dressed in wedding garb complete with floral bouquets begging to be thrown. The “sharks,” as they are affectionately known, were interested but asked a ton of questions with some side-eye thrown in. In the end, the partners were triumphant and nabbed a deal with both Kevin O’ Leary, the Canadian businessman affectionately called “Mr. Wonderful,” and guest Shark, Nirav Tolia, the founder of Next Door.

Since appearing on Shark Tank, Hello Prenup’s numbers spiked from breaking even to being on track to hit $2 million by year-end. The founders knew that Shark Tank would bring their business a spike in media exposure and a bit of Warhol’s fifteen minutes of fame regardless of the outcome. But delving into the preparations and all of the requirements necessary to complete each stage of the application was another full-time job.

All of that time and energy would be for naught if they didn’t present to the sharks. According to research, of the 40,000 applicants the show received in 2016, only 180 entrepreneurs ended up pitching the sharks. Julia and Sarabeth’s gamble paid off beyond either partner’s wildest imagination. They are also banking on huge growth post-pandemic because people have been delaying weddings during these uncertain times. Hello Prenup is also exploring an affiliate referral program as well as linking up with an online wedding registry company.

Preparing prenups may never be as fun as picking out shiny diamonds and signature cocktails, but at least it doesn’t have to be painful. Hello Prenup is easy and cost-effective – which is most certainly a match made in heaven.