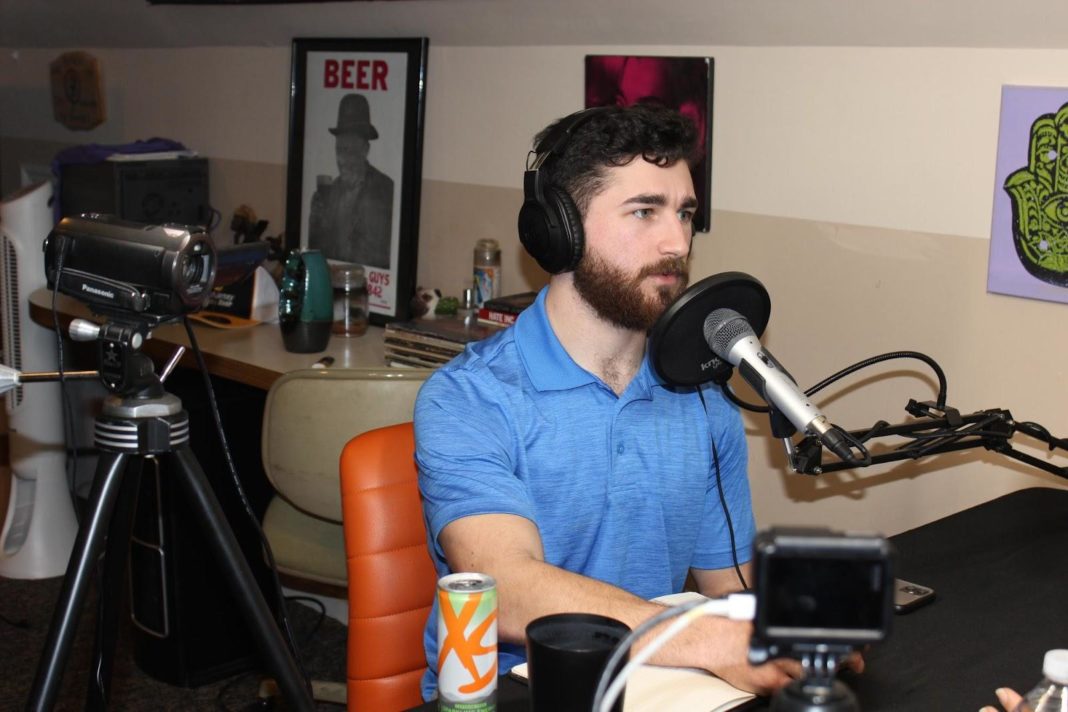 The odds were stacked against Ryan Sullivan from the start. He lived in the middle of nowhere with spotty internet, far from the crowds he’d always wanted to entertain. Calling his hometown “the sticks” would be a fair assessment. But Ryan had always dreamed bigger than his surroundings. Here’s how this budding entrepreneur left his dead-end job as a mechanic to found Podcast Principles, a podcast marketing agency with big plans.

Ryan has always been an entrepreneur. To make money in high school, he learned to DJ and spun records at parties. Before he had his driver’s license, his mom would discreetly chauffeur him and his gear to events and ensure that drop-offs happened down the block. He was selling an image that meant no one could blow his cover. It worked.

He had always been musical. He would tinker in his home studio and record music and rap bars in his free time. He also loved a soapbox. An early fan of Joe Rogan, Ryan devoured episodes and realized if one guy could get paid for talking, maybe he could too: “I did two episodes by myself. It was just me talking to my webcam and I got 200 views. I thought I was going to get five!”

When a classmate in community college boasted about earning big returns in the stock market, Ryan wanted to share his story. Ryan explains, “That’s when I realized that this guy isn’t only going to help me, he can also help other people if he had a platform. So that week, I turned my freeform podcast into an interview show.”

Ryan spent his days under the hood of a car and then would rush home to make music or create a podcast. But it wasn’t ideal. “I wanted to make my 5-9 my 9-5. I did what I enjoyed at night, but it wasn’t enough. I come from a rural area and there’s not a ton of opportunity. Nobody around me was doing hip hop or making podcasts.”

Many people would envy a mechanic’s steady income, but Ryan couldn’t shake his feeling of discontent. So he quit and challenged himself with a proposition: “I wanted to see if I could make money doing what I loved. I didn’t see working on cars as a means to an end. There was no money in it.”

Fake It Till You Make It

Another guest Ryan interviewed had made a fortune doing social media marketing. Ryan replayed that interview for inspiration and declared himself a marketer overnight. “I put myself on Upwork. It took three months but I finally landed an $80 job.” The job confirmed that Ryan’s plan was working, but to succeed long-term, he would need to pick a less saturated market. He left the mechanic’s garage to devote himself to this new career path.

Ryan’s dad was far from pleased. He told Ryan: “You’ve got to get a job. What are you doing?” But Ryan was undeterred and naive in a way that is generally reserved for the young. “I’m young. It doesn’t matter. I can go to zero. Everyone is so afraid of being broke but I’m already broke, so why does it matter?”

Ryan’s podcasting venture was still a hobby at this point, but Ryan wanted to monetize it. He shifted his focus on Upwork from social media jobs to podcasting gigs. There was just a minor issue: He had run out of Upwork credits and his savings had rapidly depleted. He needed a steady gig, and fast. His Dad was running out of patience.

While scouring Upwork, Ryan eyed a job for a business looking to launch its first podcast. It sounded ideal, but Ryan had no way of contacting them without replenishing his Upwork account. That involved money he didn’t have. He checked the company’s website. Nothing. He filled out a prospective client form and included a link to his Youtube channel with roughly 200,000 views.

Ryan’s quick thinking landed him an interview in New York City. The two-hour commute would be an investment in his future, or so Ryan thought – the job was far from glamorous. Ryan explains, “I go to New York. I do the interview. The guy is on the phone the whole time, but I don’t care. It’s an opportunity.”

Although Ryan lacked the qualifications and experience, he sold the interviewer on his hunger and drive. It worked. The company hired him to handle every aspect of the podcast from start to finish. It wasn’t a large sum of money, but Ryan didn’t care. It would get his Dad off his back. “I got to edit, produce, record, interview, write show notes, upload, distribute, do clips, everything.”

The Internet Is Your Oyster

According to Insider Intelligence, by the end of 2022, podcast listeners will account for over 20 percent of all internet users. This is around 420 million listeners worldwide. Currently, there are over 2 million podcasts and by 2028, podcasting is expected to become a $95 billion industry. “Podcasting is not just a fad or a buzzword,” Ryan explained to his dad.

Everything pointed to a lucrative career choice, but something wasn’t right. Ryan thought it strange that his boss stayed on the phone during the entire interview – a red flag. Months later, when the company began to withhold payments and people quit in droves, Ryan’s suspicions were confirmed. “The company had a toxic environment and I was burnt out,” he says.

In an ironic twist, a life coach paid for by his employer encouraged Ryan to quit and pursue a job that brought him more happiness. Ryan, the consummate entertainer, wasn’t done with podcasting. After all, it was what brought him joy, and he’d learned so much about podcast production in his short time with the company that he could help others.

Rather than look for another job and commute, Ryan launched Podcast Principles and became the go-to hub for podcasting neophytes. He offered an all-in-one package that would take people through ideation to launch and beyond.

LinkedIn became Ryan’s playground. He spent upwards of six hours each day making connections and building relationships. He packaged himself as a full-service podcasting agency and people appreciated his ability to distill the podcasting process and simplify it.

If a prospective client was wary of podcasting as a medium, Ryan never oversold. “If someone’s heart isn’t in it, they’re not going to be an engaging speaker.” Ryan wanted clients who bought into the vision. But most companies saw the inherent value and sought Ryan out.

Ryan explains: “If you have a company that sells B2B marketing and one of them has a podcast and one doesn’t, you’re going to go with the one that has a podcast because people will quickly trust that company more because they can hear them and how they interact.”

Podcasts can also be deeply personal. “I had a good friend who passed away in a tragic car accident. He had once been a guest on my podcast and his parents reached out to me. They were able to listen to him talk and it was a time capsule and it helped the family through the grieving process.”

Ryan envisions the future of Podcast Principles as a bit of an empire. He wants to manage multiple shows in a variety of industries. For context, his idol, Joe Rogan, makes $100,000 an episode. Ryan just wants to make enough to bring high-speed internet to his hometown. I do not doubt that Ryan will hook it up.