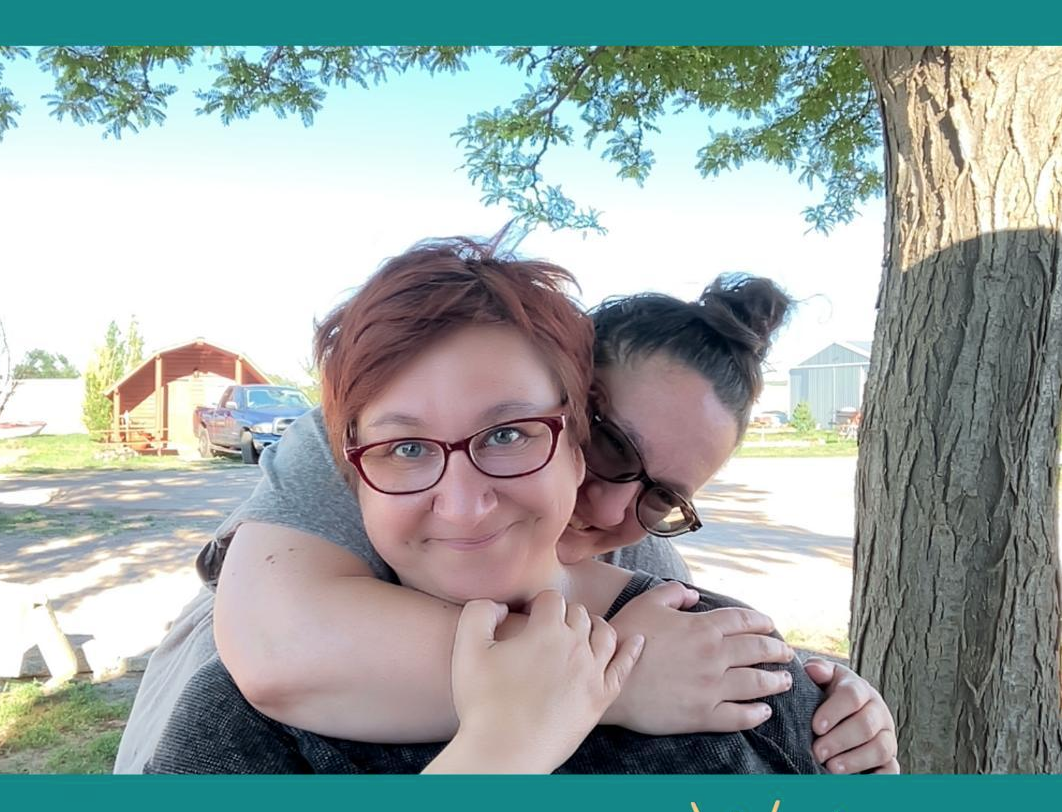 Meredyth and Jennie are married business partners living and working in roughly 112 square feet.  Although they’ve been together for a long time, they’ve only recently joined forces professionally. That decision, coupled with a move to sell all of their possessions and buy an Airstream trailer, took place when the pandemic forced them to reevaluate their happiness. They run a successful coaching business helping people “get out of their own way” and they are, without a doubt, “walking the walk.”

Jennie has a background in consulting and was laid off from a previous job that had left her unfulfilled and unhappy. The layoff stung despite her unhappiness, and Jenni was prepared to jump right back into a similar position, even though she “hated it” and wanted to rip her eyes out. Thank goodness for Meredyth, who gently pushed Jenni to pivot with one simple question: “Why don’t you start coaching?”

Jennie, who is confident and bold now, was unsure if clients would take her seriously because she was only thirty years old at the time. “In 2006, you only started coaching after retiring from a whole career.”

After Meredyth’s prodding, Jennie thought of a specific direction that made sense. “I could coach people under 30 because I was 30, so I did that on the side and got what I call a job-job where I worked at The Container Store selling empty boxes to people to make ends meet.”

Many entrepreneurs and coaches give impractical advice that can confuse a person’s hustle with practicality. Jennie explains how other coaches may say, “If you’re serious about your business, you’ll risk it all and go for it. I hate that advice. You can’t pay your bills in the real world with just passion.”

Jennie recommends having a “financial oxygen job” before making any kind of big leap. This is part of the Coach Jennie lexicon. It’s the kind of job that may not be the most fulfilling, but it pays immediate bills and helps you breathe. For Jennie, The Container Store was her financial oxygen job.

Jennie wanted to work on her coaching business full-time, but she needed capital. She thought it would take a year before she could leave her retail job. It took a couple of years longer than expected, but she admits that her last year working at The Container Store was because she had a hard time breaking up with her generous employee discount.

While Jennie grew her coaching business, Meredyth worked up the education ladder. Meredyth began her career as a special education teacher. She taught students who were deaf and had additional challenges. The job was fulfilling but difficult.

Meredyth and Jennie have been together since they were undergraduates in college. When they got married, “illegally at first, and eventually legally,” the dream was to find a way to work together. Even though they were working in separate industries, their approaches to helping others were similar. Jennie was always trying to loop Meredyth into the coaching business, but Meredyth was focused on her lane.

All of this changed right in the middle of a global pandemic. Jennie was hosting an event and Meredyth took two days off from her teaching job to assist. The event, was announced as in-person pre-COVID, shifted to virtual during lockdown. No Matter What was all about leaning into discomfort and the irony of a No Matter What event not being canceled (“how could you cancel an event called No Matter What?”) was not lost on the duo.

No Matter What is a two-day coaching intensive and people come from all over the country to plan out their next three months of personal and professional growth. It was at this event that Meredyth set her intention that changed the couple’s trajectory.

Meredyth didn’t realize how invested she would be in No Matter What.  During the event, Jennie asked her to give examples to help her clients feel safe and supported. Meredyth’s answer took her by surprise. She said, “I want this to be my last school year.”

Jennie couldn’t mask her excitement. Jennie never wanted to take Meredyth away from her education career, but Meredyth was finally ready for a change. Downtown Los Angeles, where they were living, was extremely expensive. They were stuck in the daily grind that felt very much like a rinse, lather, and repeat. “Get an apartment, get a job, work towards retirement.”

They fantasized about selling all of their belongings, getting an Airstream, and trying something new. They spent all of the early quarantine watching “an embarrassing number of Youtube videos on all things RV.”

When Meredyth announced her No Matter What goal, that quarantine dream seemed closer than ever. “Let’s get rid of everything and just go for it. We could grow the business by 200 percent (already profitable since the beginning of the pandemic) and have two people running it.” Jennie and Meredyth took a peek at their dream Airstream. At the dealership, the couple thought, “Why not?”

The duo bought the Airstream before they finalized their business plan. “We bought the cart before the horse – literally.” They didn’t even have a truck to hitch to the Airstream, and yet these “big city indoor kind of girls” were ready to say goodbye to Los Angeles for good.

There were just a few logistical problems to address first. “We didn’t have a place to put our furniture or know how to empty tanks in an RV. We knew nothing.” But online research and a few choice purchases solved enough of their problems to get them on the road.

With logistics sorted, the Coach Jennie team was ready to go. “We are not on vacation. We’re not hopping in the airstream and trying to make it 1,700 miles to the next cool place. We are inching our way and zigzagging across North America.” But they gave themselves a caveat. “Let’s just see if we like this. Let’s get to Birmingham. If we hate it or each other, we can figure out a Plan B. Let’s just get from the Fourth of July to Thanksgiving.”

They left on a sweltering summer day but even a heatwave didn’t deter them. Jennie and Meredyth “have never been happier.” Jennie explains, “There’s something about being untethered to any one place. This gives us a sense of freedom and possibility that neither of us has experienced in our entire lives.”

Jennie and Meredyth’s clients are found via word of mouth and referrals. Coaching is relational so when people recommend Coach Jennie to their friends, the impact is huge. They ask clients for testimonials and personal shares. They put them all on their website. The team maintains long-term relationships with clients and is always open to customizing opportunities. Some clients want their first experiences to be low-commitment introductory workshops. Others want to jump right into intensive seminars. Jennie and Meredyth don’t have one prescribed model.

Jennie and Meredyth charge a nominal fee for their introductory workshops. The deeply personal nature of the work means that charging a small fee is a way to build accountability. Since the workshop serves as “a way to kick the tires,” it means that the duo brings in people who’re already buyers. They’re confident that people will align with their message. Jennie says, “Once they are there, I’m inviting them to check out the “Make It Happen” membership.

Jennie and Meredyth experiment with membership tiers and models: “Experimenting is one of our favorite words.” Most of their clients are in creative and entrepreneurial industries. They believe in sharing thought leadership and “sending the elevator back down since we took the stairs.”

A tweet from the popular social psychologist, Adam Grant, explains the role of coaching for Jennie and Meredyth. He says, “It’s easy to be a critic or a cheerleader. It’s harder to be a coach. A critic sees your weaknesses and attacks your worst self. A cheerleader sees your strengths and celebrates your best self. A coach sees your potential and helps you become a better version of yourself.”

The duo is trading in their Airstream for a bigger model. They’re exploring options for super-fast internet since on-the-road hotspots don’t always deliver. This is something not even Kerouac anticipated. And don’t worry about them faring in a bitterly cold winter. Jennie and Meredyth learned their lesson with that first blistering summer and plan on being snowbirds in the Florida Keys come holiday season.