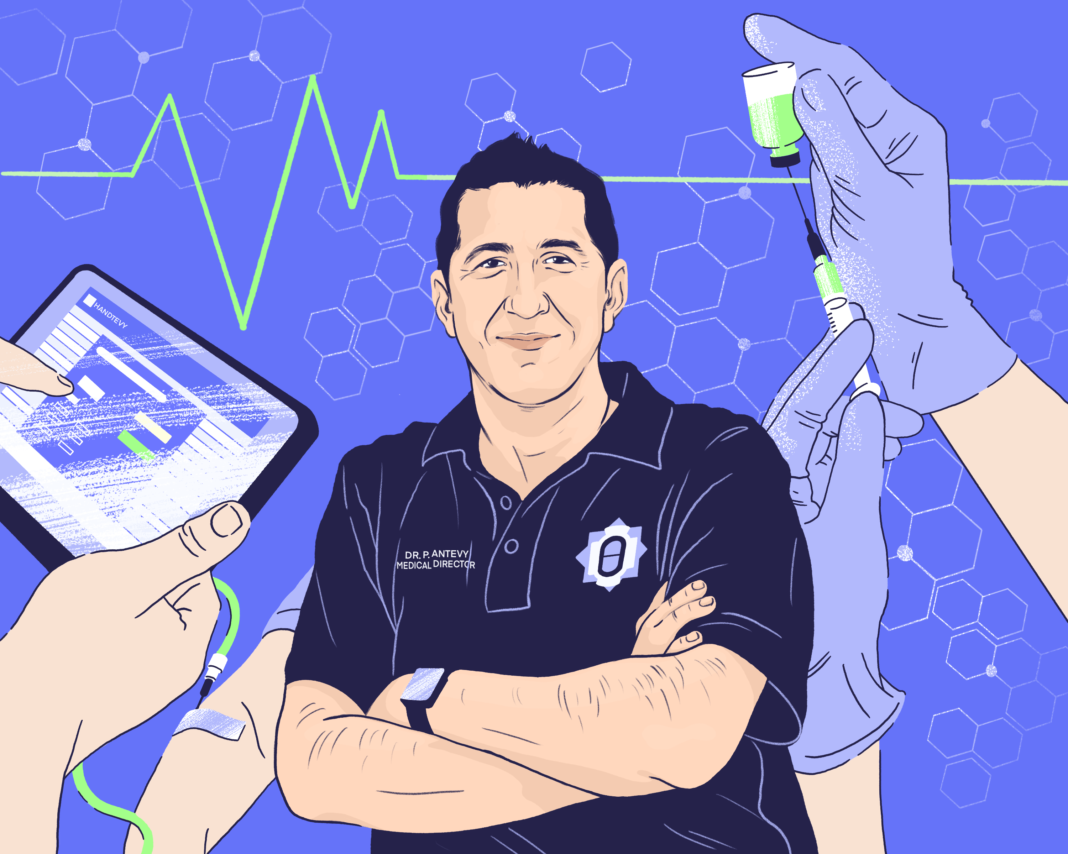 Emergency rooms are not for the fainthearted. Everything happens so quickly and split-second decisions could mean the difference between life and death. On top of an already stressful environment, pediatric doctors must be mindful of adjusting adult dosages for children in seconds. Enter, Handtevy, a life-saving dosage app employed in hospitals nationwide.

Peter Antevy, the founder of Handtevy and medical director of over 2,000 paramedics in three different counties, knows from personal experience how terrifying dosage errors can be. He gave a pediatric patient ten times more epinephrine than was safe. After she recovered, Peter vowed to ensure this would never happen again.

Peter explains why pediatric dosing is so tricky: “Just to give you an example, a one-year-old, a five-year-old, and a ten-year-old all need the same kind of series of drugs, but they’re all dosed very differently based on their size. The equipment is based differently on their size, and it’s impossible to know that information on the fly.” Peter didn’t set out to create life-saving software to solve this problem, but that’s the kind of forward thinker he is.

Until now, doctors had adjusted doses by laying out a piece of paper alongside the child, “almost like an index card that you rolled out and put to the side of the child, and where their feet land, there’s a box that lists about 45 different drugs. You have to look at the dose, calculate the volume from it, and do a math calculation in your head.” It’s easy to see why this is extremely error-prone.

Peter’s first solution was decidedly low-tech, more carnival barker than Silicon Valley. Peter came up with a way to use his hand as a way to remember dosages. Peter describes this as follows: “Tell me the age of any child, just throw out an age as if I worked at the circus, and I can tell you the five most critical drugs in the dose and volume.”

Peter turned his formula into a tiny crib sheet that could fit on doctors’ badges and called it a “Badge Buddy.” The next thing he knew, doctors everywhere were asking for copies of their own. But he was asked to include many more medications on his cheat sheets. For that, he fired up his old computer and began plugging away.

Peter went super old school and in the little free time he had, went to Kinko’s to photocopy these Badge Buddies. The demand far outweighed this one-man operation, and Peter began to charge a nominal fee to cover expenses. The company had extremely modest and low-budget technology.

Handtevy Goes Digital, But the Transition Is Bumpy

That’s when Peter realized that building an app would help many more children by scaling much faster. So, Peter found a vendor to build the app but once it was ready, he realized he had zero customers. Up until this point, most EMS offices were run almost entirely without technology. A lot of EMTs were resistant to change.

So it wasn’t as simple as just introducing them to an app and telling them to use it. He had to convince the medical profession that it could save lives, and Peter began to proselytize every chance he could get. “Before you know it, we’re in all 50 states and 1,300 cities.”

In just six years, Peter turned from a one-man operation (couldn’t avoid the pun) into a 26-person team. They’ve added an entire education system since healthcare providers need to recertify every two years. So, for example, a customer learns pediatric resuscitation with the app, and then the app integrates into their software and the Electronic Health Record. Everything is connected and transfers are seamless. Peter’s software allows him to tailor each EMS protocol since they are all so varied.

Profitable Since Day One

Handtevy is profitable and has been since day one. Peter says “Because we didn’t start in tech, we were able to fund ourselves with the initial sales that we were making which were essentially printed books and durable goods. We were able to spend that money to build an app and that recurring revenue helps us fund everything else.”

Peter stresses that he truly went into this endeavor to help people. Peter is smart and humble and it’s clear that the money is just a by-product of his need to make a difference in the world. Handtevy has already hit major milestones in ARR but it’s a number Peter prefers not to publicize as it would distract from his true mission. He measures his success in lives saved. It’s an attitude that has enabled him to assemble an incredible team and succeed in an industry that is notoriously tech-unfriendly.

Being Busy Is Peter’s MO

Peter doesn’t miss being in the field because he never gave that up. He’s still a part-time ER doctor and a full-time EMS medical director. His wife, Allison, an attorney by profession, runs Handtevy as the company’s CEO, with prior experience at the Clinton Whitehouse and NBC.

Peter is extremely grateful that his “better half” allows him to stay in his lane, always learning and growing. He doesn’t want to be the “EMS guy who does pediatrics.” He doesn’t even want to be known as “the guy who started a company.” He is simply Peter Antevy, and his modesty is astounding.

Handtevy continues to grow. In the last three months, the company has added six full-time employees. They’re building the sales team at a rapid clip. Handtevy is also working on implementing the software hospital-side.

The problem is that most hospitals’ interoperability standards remain limited, but Handtevy isn’t deterred. While the EMS side of Handtevy is completely scalable, the hospital side is working through growing pains. That said, Peter has signed up 50 hospitals which is no small feat.

Handtevy is getting a lot of attention these days. Peter continues to shy away from the spotlight and even having his business be a play on his last name makes him uncomfortable. But, the pun was too good to lose, and ultimately, Peter was overruled by Allison. Handtevy is here to stay.

The future of Handtevy is grand indeed. Peter wants this technology in every hospital and EMS unit. But if that isn’t ambitious enough, he wants to care for medical professionals who have to make hard decisions every day. He wants to make sure that they have the education and skills to “treat someone effectively, to look them in the eyes, look at their parents in the eyes, and say ‘we did everything for your son or daughter.’” Peter Antevy’s compassion and care for others truly exemplify his humanity.