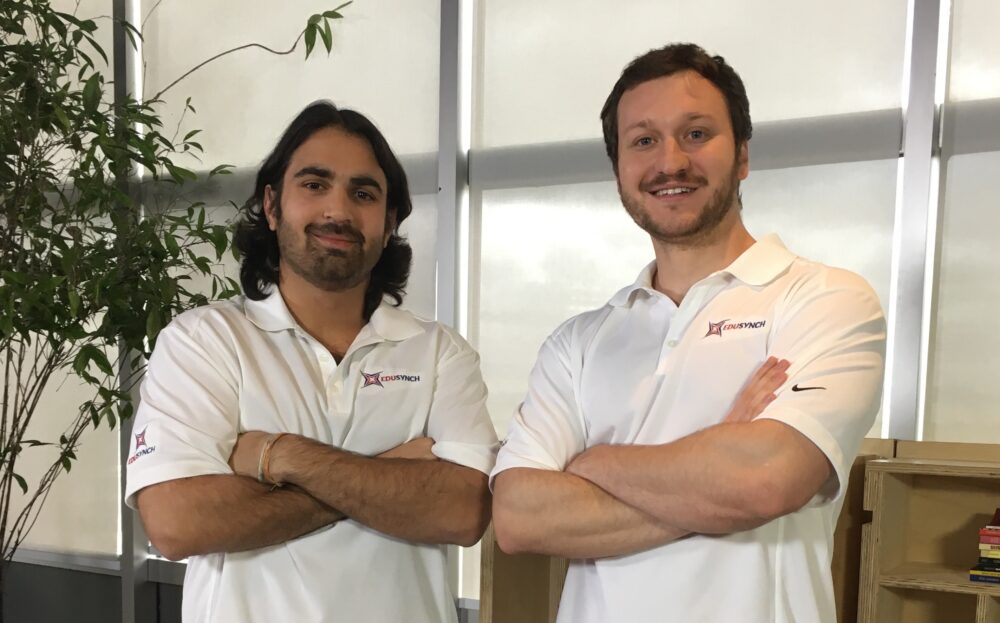 “I used to think that the only way to start a successful startup was to raise a trillion dollars and try to spend it all before the year ends,” says Sean Kilachand, founder of EduSynch – a white-label online platform for remotely creating and proctoring exams.

If you look at the news today, you might think the same. The top entrepreneurship publications mostly highlight companies raising at least $10 million at a time.

But Edusynch is an entirely bootstrapped business with a run rate of over $1 million and month-over-month profitability with zero funding. Despite VCs telling them that if they couldn’t sell at home, they couldn’t sell abroad, they now cater to an almost exclusively international customer base.

Playing to Your Strengths

In 2020, Sean and co-founder Adam Plotkin had been in the Edtech business since 2015, but hadn’t found product-market fit or turned a profit.

Their platform, EduSynch, was an English proficiency testing and prep company targeted at international students and corporate entities. One of their key services was preparing and helping to proctor tests for universities and companies. They were convinced it was a good idea, but things just hadn’t been panning out for them.

When Sean and Adam took their platform to investors they were told their business model was too ambitious. They were told they needed to focus on getting customers within a specific market before going global. “I remember several VCs telling us you can’t boil the ocean,” Sean says.

The partners knew they needed to make a move soon or risk losing the business. They had been toying with building a platform that would allow any educational institution to upload exams that could be taken remotely – but it was something they thought would be more useful a few years down the road.

A week into the pandemic, schools around the world scrambled to move their operations online and the co-founders realized a momentous opportunity before them.

With every aspect of schooling moving to the internet, little details had started to become a big issue. One of the biggest ones was proctoring cheat-proof exams online. EduSynch not only had features for students to post their exams, but also remote proctoring technology already built-in.

Seeing they had the answer to a huge problem, Sean and his team sprang to action. “We had this three-hour call where we went through our various options for how to maximize the opportunity,” says Sean.

After a few months of 20-hour days, they had what they needed.

“We took our existing platform, made some tweaks to the tech side, and changed the entire marketing around what we were trying to sell,” says Sean.“Once we changed our pitch, we got very aggressive with the marketing. Tens of thousands of emails were going out every week. Eventually, we got in front of the right people and were able to close some pretty sizable deals.”

As the company started to see traction in Thailand, Vietnam, and Malaysia, they chose to ignore the feedback they’d received from potential investors that they were stretching themselves too thin. Instead, they kept costs low and focused on iterating the platform instead of spending their time fundraising.

“We see, you know, three to five times growth for the next three, five years from the way the market is trending,” says Sean.

“We’ve Been in the Business for a While”

Before EduSynch, Sean was the first employee for a start-up his father built bringing tablets to students in Brazil.

Sean met his co-founder, Adam, at a barbecue in Rio de Janeiro hosted by a group of “enterprising gringos,” as Sean calls them. Both partners were living in Brazil among a large number of Americans and Europeans who’d moved to the country to capitalize on its enormous consumer population and fast-growing tech scene.

“It was pretty funny because we both were speaking to each other in Portuguese and then as we talked it began to dawn on both of us that we were from similar parts of the US,” laughs Sean. “Anyway, from there we found out we had much more in common and eventually that became a partnership.”

Sean’s father’s company eventually went under due to an economic crisis in Brazil, but Sean stuck with the software they’d begun building and used it to launch EduSynch.

At first, the company focused on math and science testing, but Sean realized there was a gap in the market for high-quality, low-cost preparation tools for English exams. He also became aware of the low English fluency among Brazilian students hoping to go to school abroad.

To be admitted to universities outside of their home countries, international students need to pass English proficiency examinations. “It can often be the biggest barrier to entry for these students if they’re well-versed in math and science, but can’t speak English,” says Sean, “They’ll often not get the shot they deserve and that can alter the course of their life.”

Besides creating test prep for students, Sean and Adam saw a need in the corporate realm for language assessments. Corporations today hire from an increasingly international roster but have a tough time assessing actual English proficiency. And scored educational standards like IELTS can be inaccurate after a couple of years.

“There are plenty of companies in Latin America as well as Asia that need to make their new employees speak English,” says Sean. “They would add in our exam as part of the interview process. We integrated with their applicant tracking systems and had a whole host of tools for them to use in addition to the test. We were pushing into this area before the pandemic hit.”

Their white-labeled tool for corporations to create standardized tests ended up giving them the capabilities they needed to create the service they market today.

Today, EduSynch offers a suite of bespoke English test-taking services to institutional partners and test-takers. Their key tool is their white-labeled platform where clients can post and proctor custom online testing in more than 350 languages. They also offer specialized English level testing marketed to companies and universities screening international employees and students.

One of their other key selling points is test security while proctoring online. They use a proprietary technology that leverages AI via a Google Chrome extension integrating with the existing tech stack that schools and institutions use.

When it comes to bootstrapping, Sean talks proudly about EduSynch’s early decision to focus on making money instead of raising money.

“VCs are not always right. 75% of venture-backed businesses fail within the first three years,” says Sean. “I think the days of taking money from random VCs for the sake of the brand name are long gone. It’s really about surviving and trying to establish product-market fit.”

His advice to other bootstrapping entrepreneurs or those thinking about doing so?

“There are multiple ways to run a business if you’re willing to stick it out and adapt as the market does. It’s important to stay humble and not worry too much about daily headlines. If you care more about freedom than growth, then bootstrapping is definitely the way to go,” says Sean.

When asked if they ever thought about calling it quits in the five years of unprofitability, Sean says, ”We just had this concept from the beginning that if we just stay alive for long enough, we’ll eventually figure something out. This whole idea of survival was what we were focused on.”