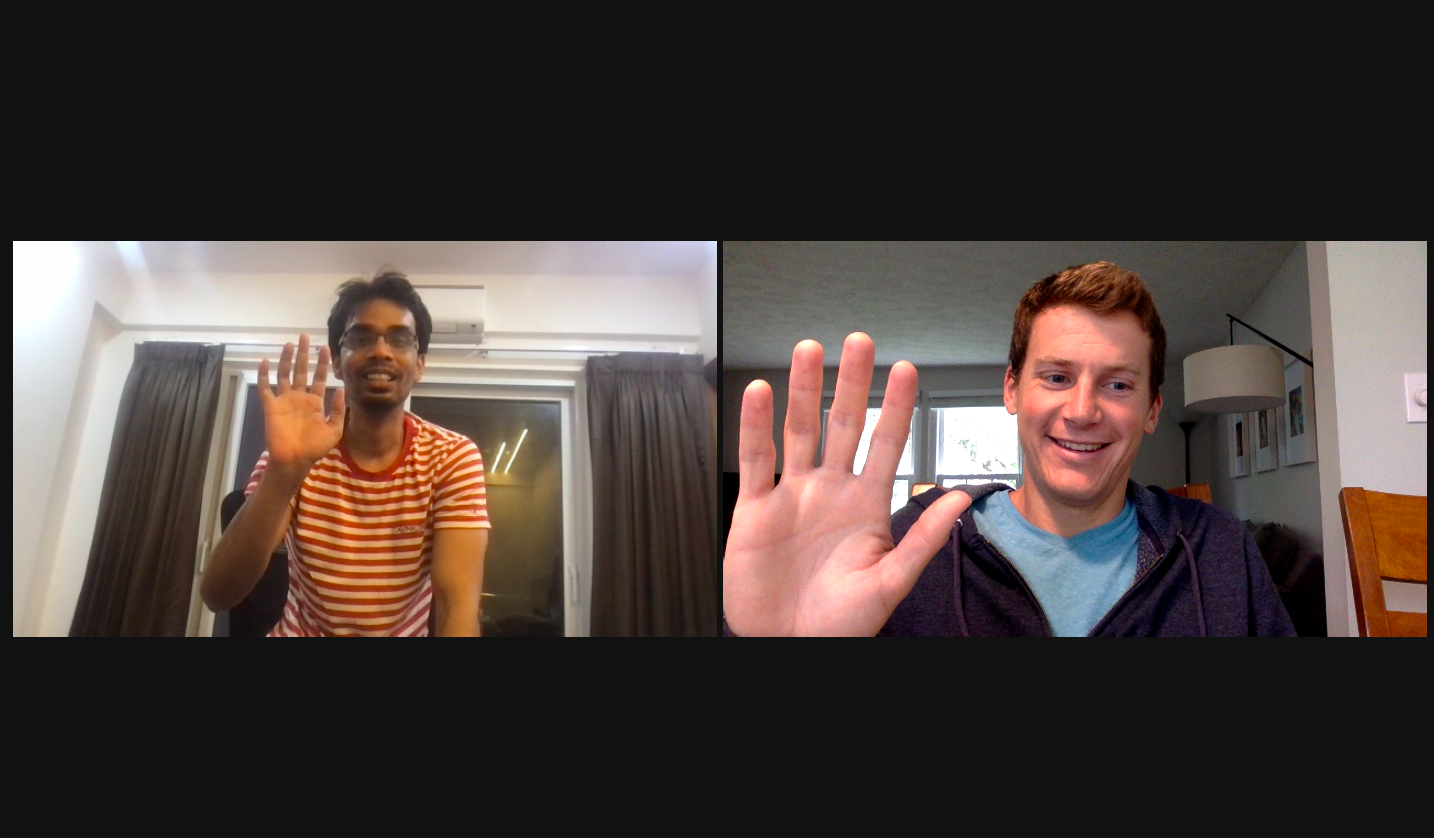 Synergy arises when you least expect it. You could be casually browsing an internet forum and bump into your perfect complement: the yin to your yang, the Mulder to your Scully. When Davis Baer met Vishal Kumar on Indie Hackers, he didn’t expect to co-found an award-winning social media scheduler called OneUp and make a friend for life.

That Davis was in the US and Vishal in India, a 17-hour flight away, didn’t matter. Financial grad Davis wanted to conquer SaaS using his nascent marketing skills and engineer Vishal to launch an MVP. Together, they had the perfect recipe for success: grit, collaboration, and validation in a competitive market in need of an affordable alternative. Zoom handled the rest.

“Vishal had built a rough MVP of OneUp,” said Davis. “He’s a solid developer, but he’d be the first to say marketing isn’t his strong suit. So he was looking to partner with someone who could take over that side of things. And it’s been a great match. Here we are three years and hundreds of Zoom calls later and our complementary skill sets work brilliantly.”

OneUp now boasts over 2,500 happy customers, two Capterra awards, and an ARR edging close to $1 million. Despite their failed attempts at a face-to-face meeting, the relationship has flourished. “We talked about meeting up in early 2020,” said Davis, “but then the pandemic hit and travel restrictions made it impossible. It didn’t stop us from becoming good friends, though.”

How Davis and Vishal Hooked in Their First Customers

Starting a business is hard. Doing it across timezones is even harder. But with dovetailing skill sets and an MVP ready to launch, Davis and Vishal had most bases covered. The question was how to differentiate OneUp in the market. It started with pricing: HootSuite, Buffer, and Later charge up to four times that of OneUp’s basic paid tier.

“Usually, you don’t want to compete on price,” Davis said. “It just ends up a race to the bottom. But early on, we priced low to acquire customers and used their feedback to make the product better. Then once we’d reached feature parity with our competitors, we felt more confident raising prices as we’d made the product better. We added features they didn’t have, too.”

OneUp supports Google My Business which lets businesses post to their Google listing. It also gives people the choice of posting from Facebook pages or their personal profiles. Both of which, Davis argues, are seldom offered by competitors. “You might think these are super niche features but you’d be surprised how many customers ask for them,” Davis said.

Why They Launched Without Paid Advertising

With Vishal polishing product, pressure shifted to Davis’s launch plan. Paid advertising was out of the question. Aside from budget constraints, Davis worried it would be a waste of money. He remembered a conversation with his brother-in-law, an entrepreneur at a seven-figure startup, who explained that social media pricing algorithms usually won out in the end.

“Paid advertising is tough to get right,” Davis said. “The problem is its unpredictability. It’s like tapping an oil well. Once it dries up, it costs more to extract. You’re subject to the whims of Facebook and Google algorithms and never know how long a campaign will stay profitable. It’s an easy way to burn cash – cash that we didn’t have.”

Instead, they launched on ProductHunt, won 4th Product of the Day, and also shared the news on Indie Hackers. Then Davis rolled up his sleeves, cracked his knuckles, and started writing a series of SEO articles on social media marketing, from how to schedule posts to posting frequency to OneUp alternatives. All were later worth thousands of dollars in new business.

“I’d research popular search questions in our niche and answer them in blog posts,” Davis said. “Then, when someone searched that topic, they’d find our site in the first page of results. Of the people who clicked, some would take the free trial and some of those would become paying customers. Content marketing isn’t an instant win, though. You need patience to see results.”

The Power of Customer-Driven Development

With co-founders separated by over 8,000 miles, you’d be forgiven for assuming product development was slow. The truth, however, is that a small synergistic team, even when distributed, can respond faster to customer needs than its larger, hierarchical peers. With modern communication tools like Slack and Zoom, OneUp could be incredibly agile.

Davis collected customers’ feedback on early iterations of the product and Vishal deployed fixes and features in as little as 24 hours. Davis believes this focus on customer-driven development and speedy execution has earned OneUp its place in a crowded market. And with a 4.8/5 Capterra score, higher than both HootSuite and Buffer, their strategy appears to be working.

“In a lot of ways, we’d love to stay a two-person company forever. It’s so simple. Because there are only two of us, we see all the feedback. If a customer complains or requests a new feature, Vishal builds it in a day or two and then we can wow that customer the next day. Bigger companies can’t do that as there’s so many people and approvals to go through first.”

The Privilege of Not Needing Funding

HootSuite, OneUp’s largest competitor, has raised almost $300 million across six fundraising rounds. When I asked Davis if he or Vishal had ever considered raising money, he was dismissive. “In our early days, we had so few paying customers that investment never crossed our minds,” Davis said. “We just focused on building a great product.”

The problem with raising money, Davis argues, is that it can eventually become an end in itself. You raise money to create a growth runway that’s then quickly eaten up by sales and marketing or employee salaries. You then have to raise more money to extend your runway, and the rounds continue until you’re no longer running your business but perpetually raising funding.

Referring again to his entrepreneurial mentor and brother-in-law, Davis said, “He’s had an overall negative experience with it [fundraising]. He got to the point where his full-time job was essentially to fundraise. As soon as he’d raised one round, it was his job to find the next one because each round only gave them a few months of runway.”

It’s also a matter of need. Davis feels lucky to have hit the growth milestones necessary to work on OneUp full-time, even if it means he and Vishal will soon have to expand their two-person team. OneUp should hit $1 million ARR in the next six to eight months, which will give Davis, a full-time father, a delegation budget to reclaim some work-life balance.

“I have a two-year-old daughter, and as my wife works full-time in an office, I’ve been the stay-at-home parent while also running OneUp. Now we’ve smashed those tough early milestones and are on track for bigger ones, we can hire our first role to take some pressure off me. I think fundraising now would just complicate matters as we don’t need it.”

While understanding the reasons founders choose funding over bootstrapping, Davis and Vishal don’t see the point in giving away equity as a lean, agile business. This choice to grow sustainably is a refreshing change in an entrepreneurial community too often obsessed with billion-dollar valuations and multi-million-dollar rounds. Davis hasn’t ruled it out forever, though.

“A lot of entrepreneurs recommend bootstrapping until you’ve got financial security,” Davis said. “Then your next startup is your home-run swing. I guess I’d be open to funding if we needed it, you know, if we were building expensive hardware or something. Some startups can’t get off the ground without funding. But we’re doing well and happy going it alone for now.”

Davis and Vishal have conquered a crowded market to scale OneUp to $50,000 MRR. I get the sense it’s not the communication tools, improving product, or customer-oriented strategy that’s defined their success. Rather, it’s the collaboration of like-minded entrepreneurs whose complementary expertise and passions have created an unstoppable force in their niche. 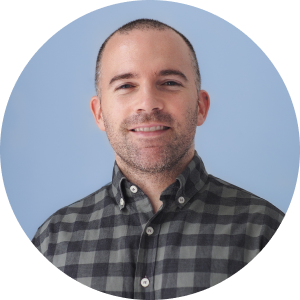