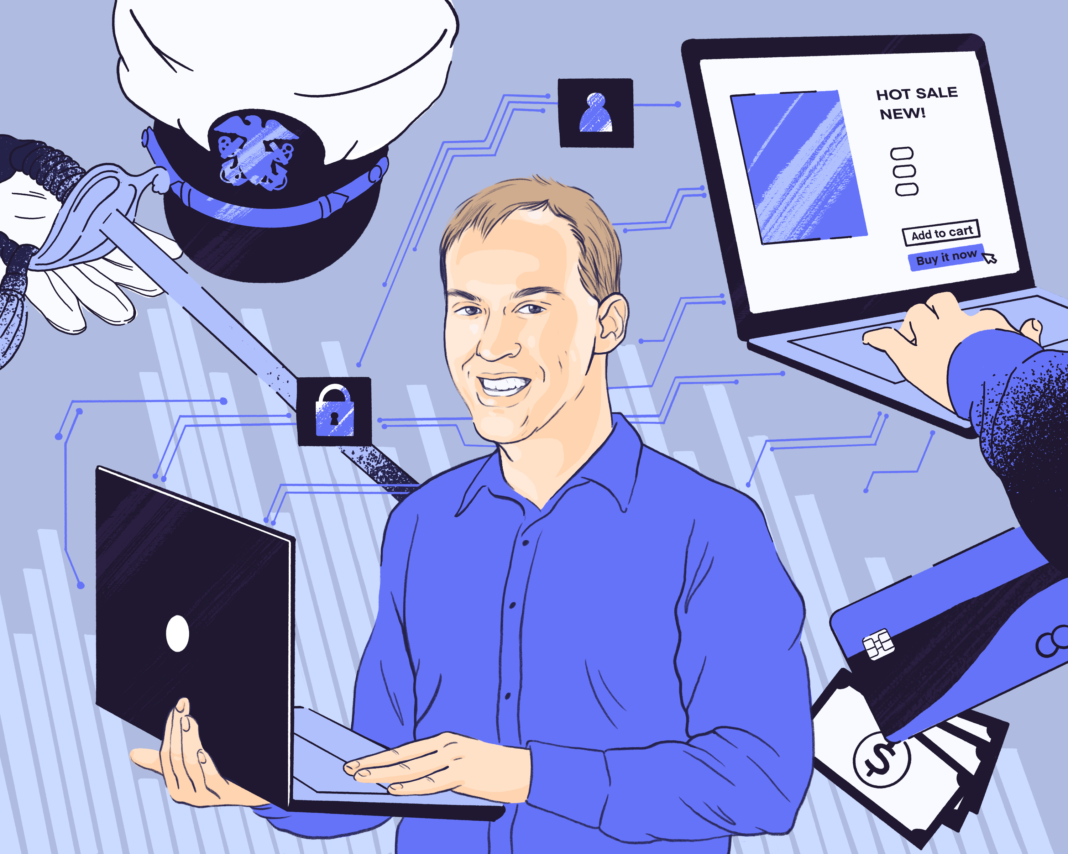 Resiliency is a part of every entrepreneur’s journey. Struggle is a given, but Jason Baudenstil, founder of Wibbets, has a story that takes grit and perseverance to an entirely new level. No spoiler alerts but be prepared for some serious plot twists including Nigerian scammers, homelessness, and bankruptcy.

Jason’s personal story solidifies why he is so passionate about protecting individual data online. Wibbets is a profitable e-commerce company established in 2016 that is rooted in protecting customer privacy above all else.

Honorable Discharge and No Job Prospects

After serving his country in the US Navy, Jason was shocked by the lack of support while job searching. He overcame childhood poverty, bouts of homelessness, and an unstable home environment as a teenager. The Military was his chance to course correct.

Unfortunately, when Jason was discharged, he received no direction or help from his former employers. Jason explains, “I discovered that if you haven’t worked in corporate America for several years, finding any kind of job at all is an absolute challenge.”

Jason spent hours each day scouring job postings online when he finally found his big break, a manager position for a staffing company. Jason was onboarded only to discover that the job was a cover for a Nigerian Crime Syndicate.

“They took all of my personal information and siphoned my bank accounts and ran up my credit cards. Credit cards got completely maxed. I gave them access to everything.” The banks were no help, as Jason says they told him “that sounds like a personal problem,” which led to Jason filing for bankruptcy.

Customers Should Be Wary of Items Selling at a Massive Loss

Once Jason’s funds were “completely obliterated,” everything changed. He began to see the importance of securing personal information so that “people don’t ever get their identity essentially swiped and have someone use it to go on a shopping spree in their name.”

Before the scammers, Jason never gave much thought to the way companies share personal data. He shopped at Amazon like everyone else. But this wake-up call gave him pause.

“When you look at the paper-thin margins that people are selling stuff for on Amazon, there’s a good chance that customer data is either being rented or sold to supplement the fact that a lot of those vendors are making things at a loss,” Jason says.

This became his primary motivation to build an e-commerce site different from everything else out there – “which is people’s information being treated like a commodity.”

Going forward, Jason would be much more skeptical of any future opportunities. Jason says “There are so many great opportunities around the world, but unfortunately, there are people that like to take advantage of the fact that some of the laws are more relaxed and you don’t have extradition treaties in certain countries.”

But Jason, ever the optimist, relies on a global supply chain for Wibbets. He’s just more cautious about the connections he makes. A global economy presents so much opportunity for growth but it has an equally dark side.

Jason’s optimism and honesty were certainly tested, but he still believes in goodwill above all. He searches for vendors that he can vouch for because he owes it to his customers to protect them. He never saves customer data, even if he knows that cookies inevitably lead to more sales.

Jason is confident that he’s onto something, and his healthy customer base solidifies this belief. “We have a loyal following of people that normally shop at Amazon but have started coming to terms with the fact that they don’t want their information treated as a commodity.”

Jason believes that he could get as much as 10% of Amazon’s market share by putting customer privacy first. Right now, Wibbets is serving approximately 3,000 customers but that number continues to grow as the holiday season approaches.

Jason studies the marketplace and his competition. He’s a very skilled SEO marketer, so he uses his skills constantly. He wants to reach customers who are as fed up with privacy breaches as he is. He also wants to make sure to listen to his competition.

What’s hot? What’s not? His close relationships with vendors allow him to constantly stay on top of what’s in demand at any given moment. Jason also researches trends on social media and nearly every available platform (all while keeping his personal information completely secure — lesson learned).

Women’s clothing and drones are top sellers at the moment but Jason is always adding inventory and looking for viable partnerships. He is gearing up to do the majority of his business during the holiday season and is adding new inventory every day.

Authenticity is key for all of Jason’s business decisions moving forward. He even takes a portion of his modest profits and gives back to charity, with past recipients being The Wounded Warrior Project and The American Cancer Society.

Right now, Wibbets’ supply chain is a mixture of items from China and Russia. The early days of the global pandemic certainly made business tricky, but Jason is nothing if not resilient. He would like to add American vendors and is searching for a way to do this in a viable way. Jason calls this “a work in progress” but he’s committed to seeing it through.

Jason’s Positivity and Tenacity Are His Greatest Assets

Jason has certainly been dealt his fair share of challenges, and that is the understatement of the century. He says “I grew up dirt poor, welfare, homeless a couple of times, got defrauded, lost everything…I don’t think Hollywood could have written a better script.”

There were many times that Jason could have given up, but ultimately, all of these trials led him to his life’s purpose. “Jeff Bezos says that overnight success typically takes about ten years…So the irony of that is that you needed all of those struggles.”

Jason is always learning, growing, and staying humble. His advice to entrepreneurs: “You can’t do everything yourself. It’s okay to find help, find a mentor, to realize that you’re human and that you are going to need people that believe in you and then actually want to leverage what you’re building and see your vision come to life. And the other important thing is that you’re going to have good days and bad days where you just want to curl up in a ball and scream. You have to realize that what you’re building, if it’s important enough to you, is worth continuing forward.”