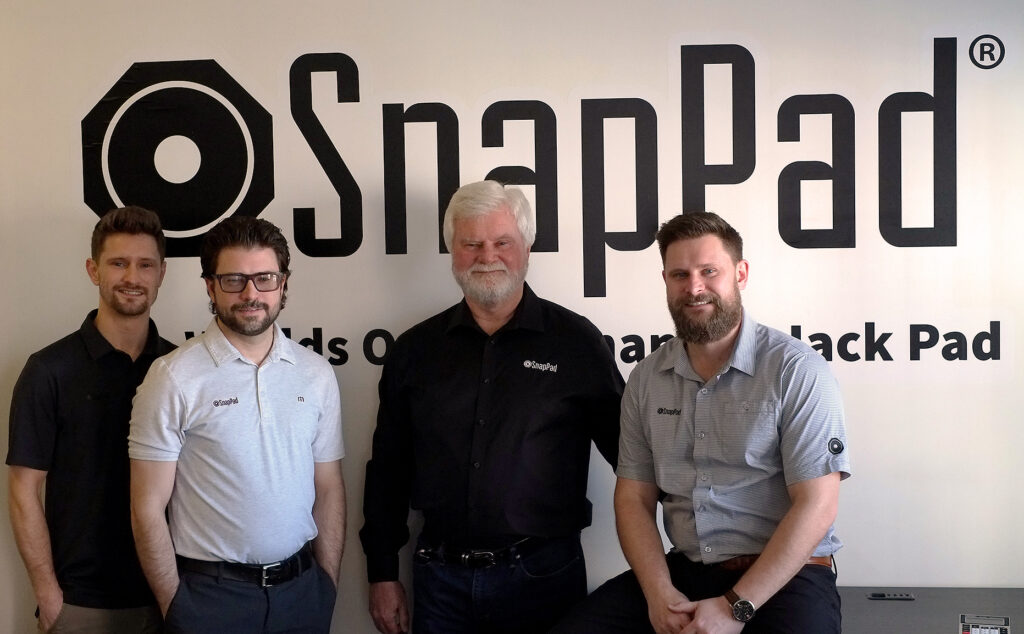 When a father loses the family home when a business deal goes sour, who’s left to pick up the pieces? Normally, it’s the children who suffer worst, but SnapPad is proof that you can overcome even the hardest challenges with your family behind you. You may have heard of a “Comeback Kid”, but have you heard of a Comeback Father and his three sons?

Gordon Wilson’s family revolutionized the RV industry with a simple fix to a common problem: As an RV or motor-home owner, how do you level your rig? SnapPad does it in minutes, but the road from idea to product was far from linear. Here’s how SnapPad became an eight-figure success story despite manufacturer and supply-chain woes.

SnapPad’s patriarch, Gordon Wilson, has been designing aftermarket products for RVs since the early nineties. Gordon helped launch an RV business in 1993, but he and his partner lost their stake to a lawyer they were working with. This unexpected betrayal was a devastating blow (Gordon lost his house among other financial hardships). Years later, however, Gordon re-entered the RV market for round two.

Gordon’s children understood his desire to rewrite the narrative. They had lived through the financial crisis and admired their father’s tenacity, so it was an easy decision to follow him back into the belly of the beast with an industry “game-changer.”

SnapPad is a simple leveling hack in the form of rubber material grips that attach permanently to RV leveling jacks. Gordon collaborated on the idea with the same friend he partnered with back in the 1990s. The two friends tinkered with rare earth magnets and rubber before landing on a manufacturer to help them bring the product to market.

The brothers used their marketing backgrounds to show off the product’s capabilities. They didn’t invest much money. Since the first RV business failed, they played it safe.

The brothers then built a simple one-page website with a Shopify button. The oldest brother, Kent, says, “We launched out of the garage and made our first sale the day we launched.” They were quickly up to $10,000 in the first three months of business. They would continue to grow over a hundred percent year over year up until 2020.

One of their biggest wins was word-of-mouth marketing, Kent says: “RVing has a good number of people in their 40s, 50s, and 60s. There are a lot of owner association groups around specific brands. We met many of them for feedback on our product, and it was all a grassroots effort.”

But the specter of the failed business continued to haunt the Wilson family, and little did they know their rapid growth would come at a cost.

“We lost control of our product,” Kent says. “We trusted our manufacturer to scale with us, but we didn’t understand that aspect of the business. We offloaded it to them so didn’t have any of our tools or tool drawings.” This decision would have huge ramifications later on.

A Thriving Business Until Supply Woes Halted Everything

SnapPad was in the process of shifting from B2C to B2B right before the pandemic. Dealerships wanted to set up wholesale accounts and manage sales themselves.

Kent explains, “RVing is a niche industry and community and if you’re a distributor with access to a product, you have an advantage if it’s a highly sought-after product. That was us, but when the pandemic hit, it kneecapped us.”

Their American manufacturer stopped returning their calls. SnapPad couldn’t fulfill any orders nor did they have any idea what their future held. Desperate, Gordon and his sons turned to manufacturers in Canada – only to hit yet another brick wall.

SnapPad was stuck. Its American manufacturer had everything: designs, formulations, shipping materials, and more. Then the team received word that the manufacturer was going out of business. Just when things were at their bleakest, an engineer who had worked on their product got in touch with Gordon to return all of their information. He even joined the team.

By the winter of 2020, SnapPad found two new manufacturers and created their own distribution center which had just come online. They were finally able to fulfill all of their backorders, some 40,000 products since the start of the pandemic. To celebrate, Kent says, “We opened a nice bottle of wine in the office.” They certainly earned it.

SnapPad felt fortunate to come back online, but they would no longer test their luck. They swore off the days of outsourcing and offloading and instead began to focus on integrating the supply chain as much as possible. They’re currently looking at a manufacturer in South Carolina and SnapPad hopes to buy them in the next couple of years and build a distribution center on that land.

Kent says, “Our process worked great until it didn’t. We just didn’t prioritize manufacturing fast enough and by the time we recognized it, it was too late.” He urges founders to keep abreast of all aspects of their businesses to avoid the same hardships. If their story helps just one entrepreneur avoid making the same costly mistakes, they’ll have paid it forward.