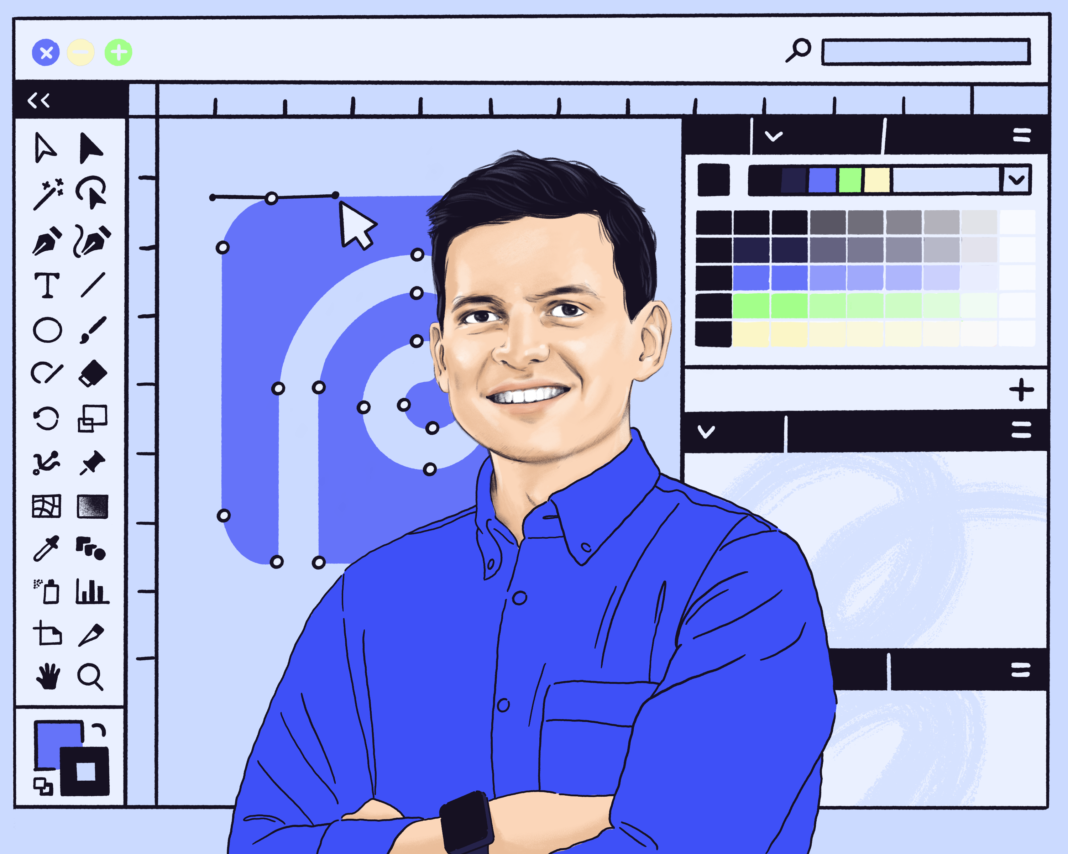 Photopea’s origin story began at a small desk in a college dorm room. Its founder, Ivan Kutskir, is a Czech who was born in Ukraine. When he wasn’t studying for his computer science degree, Ivan devoted his spare time to programming and coding – for fun. His pride and joy, an image photo editor named Photopea (“pea because Apple was unavailable”), has morphed from a side project to full-time business in nine years.

Ivan first offered Photopea as a work in progress. He would fiddle around and experiment in his free time in the way that some people unwind after work with a glass of wine. While he was completing his MA in Theoretical Computer Science, Ivan spent his free time on his project, working long hours while many of his peers had gone to bed.

Photopea is a powerful image editor that works seamlessly with vector and raster graphics. It’s partially open-source, interoperable, and requires no plug-ins. Better yet, you can use Photopea to open and manipulate files from cost-prohibitive vendors like Adobe Illustrator and Affinity Photo.

When Ivan graduated with his second MA, he watched his friends apply for jobs and make enviable amounts of money. But Ivan didn’t follow their lead and instead continued developing Photopea. Advertising brought in some income, but it was very little.

“I said to myself, this is not making enough money. I knew that I should probably start looking for a normal job at some point,” Ivan says. “I felt uncomfortable leaving Photopea unfinished because it had so much potential. Many people would benefit from it and there was no one else who could do it other than me. I kept thinking that I would stay poor for maybe a year or longer.”

In Photopea’s first year, 2012, the software allowed customers to open Photoshop files if they didn’t have Photoshop installed on their computers. Although customers could see images and multiple layers, Photopea did not yet have editing capabilities. That came later.

Flying a Plane While Building It

The next year, Ivan added basic tools so that users could create and delete layers. Then he added a save functionality. Ivan says, “In the beginning, if I didn’t see that my work was useful to someone, I would not be motivated to keep improving it. I couldn’t see myself working on it for two years in private and not publishing it until it was a finished product.”

When Ivan first started, he had no budget for promotion. Ivan explains: “I wanted to tell people about Photopea but I didn’t have the means. My only option was to do it all myself.” Ivan shared information about his product on multiple subreddits dedicated to Photoshop users. He scoured Twitter, Facebook, and HackerNews as well.

Ivan gathered up intel and requests for new features on GitHub. Users were encouraging and excited about the product. They often sent motivating posts that fueled Ivan’s passion for his (now) long-term project. They reported bugs which Ivan quickly fixed.

People started reviewing the product on various blogs and social media channels. A dedicated Photopea subreddit appeared on Reddit. It’s now a thriving community of over 17,000 Photopea customers who help each other troubleshoot issues and suggest features.

Ivan hosted a couple of AMAs and the response was overwhelming. Over 1,500 people commented during his last one. They also provided a forum for feature requests that Ivan added to his product roadmap. For example, Ivan recently added an offline mode that a user requested last year.

Ivan received many comments thanking him for his work. Comments ranged from high school computer science teachers to programmers and graphic designers and they were all equally positive. One teacher wrote, “A huge thank you from every graphic design teacher who had to scramble to find a way to teach virtually when all your students have Chromebooks. I could not have done my job without it.”

Currently, 90 percent of Photopea’s income comes from advertising. Although the basic Photopea service is free, you can choose a premium account that removes advertising. The premium cost is $3 a month and roughly 1,500 users pay for this service. Photopea currently has 300,000 active users per day and on average they spend 45,000 hours a day on the app.

Running a Business Needn’t Cost More Than a Gym Membership

Ivan’s only expense is $45 a year for the server, around the price of a gym subscription. He explains, “It’s all rendered in the user’s browser. Photopea doesn’t have a database, and there is no backend. I only pay for the hosting of Javascript scripts and static files.”

Far from Ivan’s early days of being cash-poor, Photopea reached $1 million in revenue in 2021. Ivan has been riding solo all this time, but he’s starting to build a team to help him. It’s tricky because Photopea is Ivan’s baby. He wrote the code, and he finds it easier to fix the majority of issues himself. Ivan admits that his ideal employee would be “a copy of myself.”

While Ivan looks for his doppelganger, he has enlisted a friend to outsource some of his tasks. His Photopea subreddit does most of the customer service. A team of “super users” troubleshoots common problems and even reminds Ivan of features that were added but forgotten.

Ivan doesn’t get a lot of complaints. He says, “There’s not that much customer service because it’s a free tool so nobody can complain or call me in the middle of the night. Hey guys! It’s free. If you don’t like it, you don’t have to use it.”

Ivan’s journey paid off in the end, but he admits that he doubted himself along the way. “For the first couple of years, I thought that I was wasting my life and I thought that I would throw it all in the garbage and do something else.” Ivan’s fans bolstered him and encouraged him to keep going. The power of his community and feedback from his super users paid off handsomely. It’s been a long ride from its first iteration, but Ivan is just getting started.