This “League of Superheroes” Is Not Your Average Consultancy, and Their Success Is Astronomical 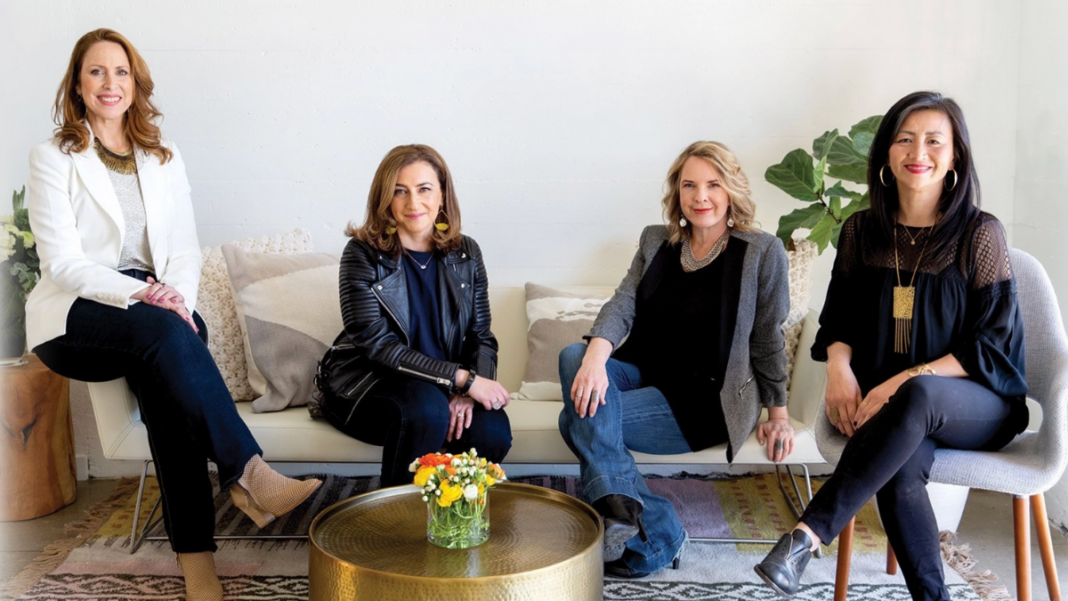 What happens when four brilliant and creative women join forces to help businesses tap into their full potential? You have a “League of Superheroes” hiding in plain sight. An appropriate moniker because every single member of Intune Collective, a strategic consulting and branding agency, activates their special powers to make magic happen for others. The results speak for themselves to the tune of one million-plus ARR and growing.

Before joining Intune, CEO Christine Hildebrand ran a successful global business strategy and branding company. She was also on the founding team of GoHealth Urgent Care, now the third-largest national urgent care provider in the US. In addition to many other successful startups, she grew the real estate company, Keller Williams, from $80 million to over $500 million in four years through a business strategy she spearheaded.

She’s also a Master Certified Spirit Coach and meditation teacher. She believes consciousness is the secret sauce to business development. Christine uses the power of energy to help teach people how to move through obstacles and blockades. Sometimes, we need to get out of our own way. If this sounds unconventional, you’re beginning to understand that Intune Collective isn’t like anything you’ve seen before.

As Christine continued to grow, she wanted to find others with a similar vision, namely “shifting the patriarchal paradigm of how businesses traditionally run.” She had been “subconsciously” looking for a business partner when she met Wendy Horng Brawer at the Hivery, a women’s co-working space in the Bay Area. Subconscious because, well, energy.

Wendy has a background in educational leadership and human development and as the Chief Innovation and Learning Officer for Intune Collective, she believes, “All things are possible. Leaders and ideas can come from anywhere; it’s up to us to be open to the possibility and create a sense of belonging first to invite it in.”

Wendy calls upon her background in curriculum development and approaches teams of people as group projects where collaboration is key. Not everyone loves a group project, but somehow, when Wendy describes it, you’re all-in. She describes her vision as someone who helps “human beings move from where they are now to where they want to be.”

Joining Wendy and Christine are Sofia Chancey, Head of Strategy, who has over 20 years of Big Four consulting experience, and Lisa Hardy, Head of Branding Strategy. Sofia brings deep experience and expertise in healthcare and serves on the Board. She also advises several start-ups today in the biotech and health industries.

Lisa’s genius comes from making complex ideas, forms, and identities clear and simple. With over 25 years of branding and design expertise, most recently at Facebook, Lisa conceptualizes a brand as energy that needs to be expressed both internally with employees and externally with customers. Yes, there’s that energy again. It comes up a great deal because it’s not just a talking point, it’s Intune Collective’s MO.

This is not a one-size-fits-all approach to business. Intune Collective analyzes and develops every partnership with a fresh set of eyes. As the team is so relational, it’s no surprise much of its business comes via warm leads. In many cases, these leads turn into red-hot projects that land and expand. A two-hour leadership retreat can turn into multiple projects, for example. If clients are initially wary – many of them have never even meditated – the results change minds quickly.

What makes Intune Collective different? The team of women behind the name isn’t traditional in any sense of the word. Proof positive: the team launched their company in the middle of a Global Pandemic and celebrated with a “Joy Activation Party” – socially distant of course – in the parking lot outside their co-working space. The guest list included collaborators and those early joiners in their collective ethos.

After the Launch Party – ahem – Joy Activation Party, the team asked themselves: “What would it take to reach our revenue goal in the next six months?” By revisiting this question during their weekly leadership meetings, they kept this intention alive. They even exceeded this goal as client work continued to manifest. And there’s more.

According to Intune Collective, “Trust is the most foundational piece. If anything breaks apart, it’s because of trust and then you have to repair it and that can take a long time.” Like economist Clayton Christensen famously said, “It’s easier to live in integrity 100 percent of the time than 98 percent of the time.”

Intune Collective’s founders commit to “adding their side hustle revenue to the pot”, helping build a runway for the growth and development of their company. Regardless of who was making the money and how much, everyone is “all in” on the company’s success. Intune Collective believes in the spirit of giving with joy and generosity. That’s trendy around the holiday season, but for Intune Collective, it’s a way of living.

Talking about energy and spirit isn’t an easy sell – at first. But the results speak for themselves. One client, an ed-tech company, reached out to Intune Collective because “they were growing so rapidly that they needed to expand from a leadership team of five to 16.” The process of transferring authority required trust, a sense of unity, and mutual support. The group hired Intune Collective to find a solution, which they did, albeit an unconventional one.

They brought rowing coaches to help transform the office mates into crewmates for one afternoon. Why rowing? “When you row in sync, you can feel cohesion around you. What does it take to stay in sync? Who’s leading? How do they lead and how do people follow?” After this one experiment, the team felt a kinship they hadn’t experienced in over four years of working together. They brought the camaraderie from the boat to the office, sans oars.

Intune Collective enables learning through self-discovery and support. They don’t feed people answers, which wouldn’t be sustainable long-term. To change people’s behaviors, they have to feel invested in the growth process. The power, and yes – the energy – is strongest when businesses discover answers for themselves.

Making teams feel seen, supported, and heard is as important as bottom lines. When you live and breathe these ideals, helping others grow authentically is second nature. “We create safety so that people can speak the truth in real-time. We create belonging so that people want to contribute their best to their team and company, and we help leaders to feel and foster pride and dignity in their work, which carries over to culture and how things get done. When we’re not ‘in it’ together, that’s when things fall apart.”