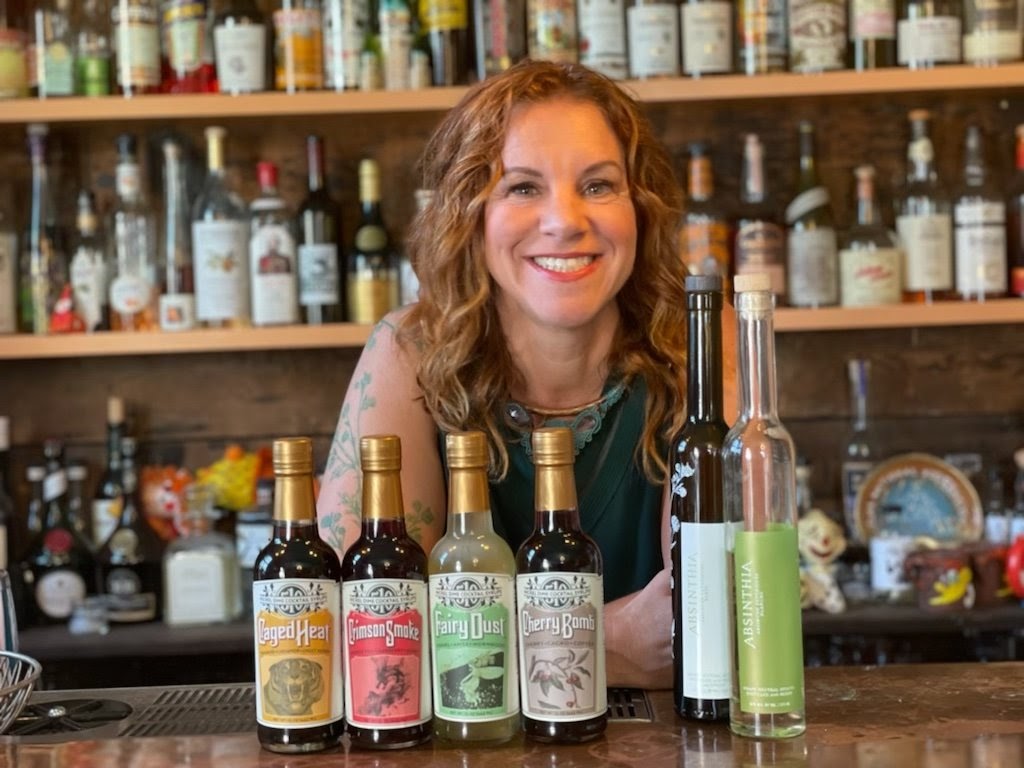 Absinthe has a long and storied history but it was illegal to imbibe for most of it. How Absinthia Vermut turned absinthe into a household name and a six-figure business model, Absinthia’s Bottled Spirits, says a lot about her creativity, drive, and passion.

Let’s start with the basics. Absinthe is far from moonshine and a much closer relative to gin. It’s a distilled spirit with botanicals. Wormwood and fennel are the two ingredients that make absinthe pop with flavor.

It wasn’t just the liquor, which was unique and memorable. It also tapped into Absinthia’s knowledge of and interest in the role liquor played in art and culture, particularly during the prohibition. In fact, she loved the drink so much, she became known as “Absinthia,” a name she uses to this day.

That first night that Absinthia sipped absinthe, it had been illegal for about eighty-five years. Absinthia felt a calling to the beverage and she quickly started making bootleg bottles soon after to share with friends.

Absinthia admits that her first bottles weren’t very good. She waxes nostalgic about that time: “We didn’t know much about absinthe at that point. It was made with Everclear and food coloring (wormwood is known for its distinctive greenish hue). It was terrible but we thought it was absinthe.”

From Bootleg to Bonafide Business

Fast forward ten years and now absinthe is legal – which was something that Absinthia never expected in her lifetime. She wanted to jump at the opportunity to turn her passion project into a bonafide – and legal – career. But she didn’t know the first thing about running an alcohol business.

The alcohol business has a reputation for being a boys’ club and there are so many other factors at play from the distiller, to the distributor, to the end seller. Managing a three-tier system with a product that only recently became legal seemed precarious.

Absinthia trusted her gut despite the initial uncertainty and decided this would be a career move. But first, she went back to school to get her MBA. She was a single mom with two young kids and a BFA. She wanted to arm herself with every opportunity to succeed and she didn’t feel that her art background was enough to carry the business.

While there, she had an unexpected opportunity that she couldn’t pass up. Her friend was making signature cocktail syrups behind local bars as a mixologist. He wanted to provide the syrups to other bars and turn them into a full-fledged business, essentially scaling his syrups for other bartenders.  Absinthia became a cofounder and six years later, she acquired the syrup business when her friend wanted to go back to bartending full-time.

Risking Everything for a Dream

To fund her absinth business, Absinthia risked everything including selling shares of a fintech business that her brother and father started. It was risky with two small children at home, but she felt strongly about the ROI.

Absinthia also dove deep into absinthe research on Google and found a trove of resources. She discovered the “Wormwood Society” with loads of vintage recipes scanned from dog-eared pages of antiquarian books.

Once Absinthia settled on a proper recipe (this was light years away from her first iteration, thankfully), she set to work finding a distiller. Since absinth shares a lot of foundational makeup with gin, finding a gin distiller made the most sense. Absinthia was able to find someone nearby willing to help. The only problem was that this distiller had never made absinth before. Absinthia says, “We were all learning together.”

Absinthia’s background in art at NYU meant that she had developed aesthetic tastes and was looking for something specific when it came time to branding and bottling her liquor. But being no graphic designer or a fine artist, Absinthia had to put her trust in another artist who could execute her vision. For Absinthia, this was a pivotal piece she couldn’t do on her own.

Absinthia scoured her network and met a friend-of-a-friend who was a wine-label designer. This friend sketched out wormwood, and Absinthia loved the iteration so much that she had it tattooed on her arm. That is love. The wormwood became the basis for the branding and labels on all of Absinthia’s bottles. She settled on calling the company Absinthia, her nickname, because the drink was a reflection of her.

Absinthia gets most of her business from referrals, specifically warm leads. Customers request that their local liquor stores carry Absinthia, so when Absinthia calls, it is far from a cold call. Instead, it’s an organic connection that has led to many fruitful partnerships.

Absinthia would also go door-to-door pre-pandemic. She was so confident about her product, and rightfully so. The labor of love was evident in her hands.  Absinthia wasn’t afraid to show up at local establishments with a bottle or two in hand.

When Covid hit, Absinthia had to pivot to selling online. This is something that she hadn’t even considered up until then. She invested some capital into digital marketing but it didn’t deliver – her ads weren’t reaching her intended audience, and instead, it felt much more like throwing something against the wall and seeing what sticks. She was spending a lot of money and her sales stagnated.

Absinthia parted ways with the marketing firm and is moving to a “friend of a friend” model. She uses brand ambassadors in major American markets like San Francisco, Los Angeles, New Orleans, and New York. Similar to her customers calling up their favorite liquor establishments, brand ambassadors can sell the product through personal networks and connections.

Much to Absinthia’s children’s (now teenagers) chagrin, she is learning how to navigate TikTok. Her daughter’s brutally candid feedback? “Yeah, it doesn’t have the TikTok vibe.” Back to the drawing board.

Selling Wormwood to the Masses

Absinthia currently has a team of eight employees who help with SMS marketing, warehousing, and bookkeeping. Absinthia wants to take the brand even further. She wants to create distinctive canned cocktails and marry the cocktail syrups and the various versions of absinthe in a unique and tasty way.

Absinthia currently creates two versions of absinthe. The blush absinth comes out of a still clear. It was popular during the prohibition because it had a distinctive color and there was no mistaking it for something else. The grapes, wormwood, fennel, and coriander are mixed with different herbs to turn it green.

Absinthia has experimented with putting the absinthe in an oak barrel for four and half months which resulted in it tasting “unique in the best possible way.”  The oak barrel gave the liquor a caramel and vanilla flavor.

The bottles are always half-size because absinthe packs a punch. But, Absinthia never wanted short or stout bottles. Instead, she chose long bottles with “stature and span.”

Having specific bottles meant sourcing special glass since the size was completely unconventional. To make it even more challenging for Absinthia, no one in the United States made bottles like this.

Because of Covid shipping delays, Absinthia couldn’t rely on cost-effective vendors in China. Absinthia ended up finding the bottles in Europe through a vendor in New York. This eye for style did, however, cost 44 percent more per pallet.

Absinthia also wanted specific seals and those caps stuck out, which meant ordering custom shipping boxes to fit the longer glass with the tops on. She owes the aesthetic to her BFA and MBA background: “It’s the weirdest combination but I bring a lot of creativity to my business.”

Absinthia is what happens when your passion project becomes your full-time job. It makes for some pretty interesting business meetings. That’s the point – when you love what you do, stuffy meetings are replaced with boozy lunches and everyone wins.